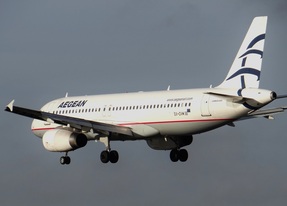 Aegean Airlines SA is the largest Greek airline by total number of passengers carried, by number of destinations served and by fleet size. A Star Alliance member since June 2010, it operates scheduled and charter services from Athens and Thessaloniki to other major Greek destinations as well as to a number of European destinations. Its main hub is Athens International Airport in Athens, with a secondary hub at Thessaloniki International Airport. It also uses six other Greek airports as seasonal bases during the summer. It has its head office in Kifisia, a suburb of Athens.

In 2012 and amidst the unprecedented economic crisis that Greek tourism faced, Aegean Airlines accumulated a total number of passengers of 6.1 million but with a sharp increase in passengers from International destinations to regional airports of Greece (Heraklion, Rhodes, Corfu, Chania, Thessaloniki). Athens International Airport suffered a decrease of 6% from 2011 but the airline managed to increase the load factor of its scheduled flights from 68.9% to 74.3%.

In 2013 the airline reported carrying 6.9 million passengers, an increase of 12% compared to 2012, with an average load factor of 79%.
On 21 October 2012 Aegean Airlines announced that it had struck a deal to acquire Olympic Air, and the buyout was approved by the European Commission a year later, on 9 October 2013. Both carriers continue to operate under separate brands.
History
Aegean Airlines was founded as Aegean Aviation in 1987. It was originally a VIP/business air operation specialising in executive and air ambulance services. On 17 February 1992, it became the first airline to be issued with a Greek independent air operator's licence. After it was bought by Vasilakis Group in 1994, Aegean Aviation commenced VIP flights from Athens all over the world with wholly owned Learjet aircraft. The Aegean Airlines name was adopted with the start of scheduled passenger services at the end of May 1999.

Aegean's first commercial flights were in May 1999 from Athens to Heraklion, Crete and Thessaloniki with 2 brand-new wholly owned British Aerospace Avro RJ100. In December 1999 Aegean also bought Air Greece. After an agreement in March 2001 to merge Aegean and Cronus Airlines, the company operated for a while as Aegean Cronus Airlines until full integration. Since 2005, the airline has been in partnership with Lufthansa, offering participation in the Miles & More programme, and its flights, in addition to its A3 code also have the Lufthansa LH code. In March 2006, Aegean Airlines also entered into a co-operation agreement with TAP Portugal. In December 2008, Aegean Airlines announced its co-operation with Brussels Airlines.

In 2009, Aegean Airlines started codeshare agreements with; bmi, Brussels Airlines, Lufthansa and TAP Portugal.
As of October 2013 the airline is owned by Theodoros Vassilakis (38.69% - 29.23% directly and 9.46% via Autοhellas SA), Alnesco Enterprises Company Limited (9.48%), Siana Enterprises Company Limited (9.48%), Konstantakopoulos Achilleas (6.39%).
On 26 May 2009, the Aegean Airlines' membership application was approved by the Chief Executive Board of Star Alliance. Aegean officially joined the alliance on 30 June 2010.

Attempted merger with Olympic Air and buyout
In February 2010, initial shareholder discussions took place to consider co-operation between Aegean Airlines and Olympic Air fueling rumours of a possible merger. On 22 February 2010, Olympic Air and Aegean Airlines announced that they agreed to a merger. The newly merged airline was to carry the Olympic brand name and logo, after a transition period in which both airline brands will be used in parallel. The Aegean brand would cease to exist after the transition period. It was expected that the merger would be finalised and the new combined airline would begin operation by October 2010.

Aegean joined Star Alliance at the end of June 2010. The intent was for the merged carrier to be a Star Alliance member, despite the fact that Olympic Air was forging ties with SkyTeam pre-merger. Star Alliance welcomed the proposed merger, releasing a statement stating "The integration teams from both sides will soon meet to assess the necessary steps, in order to guarantee a smooth transition of the merged Aegean Airlines and Olympic Air operations into the Star Alliance network".

On 26 January 2011, the European Commission blocked the merger between the two airlines, citing anti-competition concerns. The commission stated that the merger would have created a "quasi-monopoly" in Greece's air transport market, with the combined airline controlling more than 90% of the Greek domestic air transport market. The EC further stated its belief that the merger would lead to higher fares for four of the six million Greek and European passengers flying to and from Athens each year, with no realistic prospects that a new airline of sufficient size would enter the market to restrain the merged airline's pricing. Additionally, commissioner Joaquin Almunia stated that the merger would have led to higher prices and lower quality of service for Greeks and tourists traveling between Athens and the islands. Both carriers offered remedies in an attempt to ease concerns, though the EU believed that they would not be enough to protect travelers adequately and ease competition concerns. One of the remedies offered by the airlines included ceding takeoff and landing slots at Greek airports, though the commission noted that Greek airports do not suffer from the congestion observed at other European airports in previous airline mergers or alliances.

On October 21, 2012 Aegean Airlines announced that it had struck a deal to acquire Olympic Air, pending approval by the European Commission.On April 23, 2013, the European Commission issued a press release announcing it was starting an in-depth investigation into the proposed acquisition of Olympic Air by Aegean Airlines and announcing that the Commission will have reached a decision by September 3, 2013. On August 13, 2013 it was published in the Greek media that the final decision had been delayed until October 16, 2013. The merger was approved by the European Commission on October 9, 2013 citing that "due to the on-going Greek crisis and given Olympic's own very difficult financial situation, Olympic would be forced to leave the market soon in any event".

Fleet
As of March 2014, Aegean Airlines operates an all-Airbus fleet consisting of the following aircraft with an average age of 5.7 years: