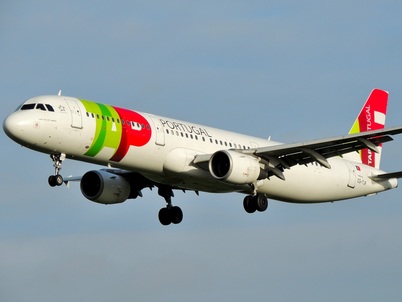 TAP Portugal, founded 1945 as Transportes Aéreos Portugueses, SGPS, S.A., commonly known as TAP, is the national airline of Portugal. TAP Portugal is 100% state owned and has its head office on the grounds of Portela Airport in Santa Maria dos Olivais, Lisbon, and has been a member of the Star Alliance since 14 March 2005, the same day on which the company celebrated its 60th anniversary. Its hub in Lisbon is a key European gateway at the crossroads of Africa, South America and North America. Privatisation of the airline was announced in 2011 as part of Portugal's €78 billion bailout agreed by the EU and the IMF. but negotiations stalled and may be continued in 2014.

According to the JACDEC Airliner Safety Report released in January 2011, TAP Portugal was rated Western Europe's safest airline and the world's fourth safest airline, only after Qantas, Finnair and Air New Zealand.

In 2011, TAP Portugal was elected World’s Leading Airline to Africa and, for the third consecutive year, TAP held on to the title of World’s Leading Airline to South America. The trophies were presented during the Grand Final Gala Ceremony of the World Travel Awards (WTA), considered the "Oscars" of the world travel industry.
Global Traveler Magazine named TAP Portugal 'Best Airline in Europe' for the year 2011, and again in 2013.
TAP originally meant Transportes Aéreos Portugueses (Portuguese Air Transportations). This was dropped in 1979 when the company changed its name to TAP Air Portugal, then dropped again to its current operational name, TAP Portugal.

History
Early postwar operations
The airline was founded on 14 March 1945 and began commercial services on 19 September 1946, from Lisbon to Madrid with a Douglas DC-3 under the name Transportes Aéreos Portugueses (TAP). On 31 December, TAP began its Linha Aérea Imperial, a twelve-stop colonial service including Luanda, Angola and Lourenço Marques (now Maputo), Mozambique.
In 1947, domestic services commenced from Lisbon to Porto as well as from São Tomé to London. Four Douglas DC-4 Skymasters were purchased in 1947, remaining in service until 1960. These were used on the routes to Africa and to major European destinations including London. TAP began service to Tangier and Casablanca in 1949. In 1953, the airline became a private company.
Lockheed Super Constellation four-engined pressurised airliners were acquired in late 1955 and were immediately introduced on the TAP African scheduled services to Luanda and Lourenco Marques.
Three Sud Caravelle twin-jet airliners were acquired in July 1962 and were operated on the airline's more competitive European routes.

The jet era - the mid 1960s onwards
The one-millionth passenger flew on TAP on 19 June 1964, 18 years after the airline began operations. In 1969, service to New York via Santa Maria Island began. Boston was added to the New York service in 1970. In 1975, TAP was nationalised, becoming a state-owned corporation (Empresa Pública) and changing its name to TAP Air Portugal in March 1979.
TAP purchased Boeing 747s during the 1970s, replacing their Boeing 707s; but they were eventually sold due to lack of demand. They were replaced by Lockheed TriStars and Airbus A310s on long-haul routes. In 1985 TAP established its charter subsidiary Air Atlantis. By the late 1990s, TAP had expanded its fleet by selling its older Boeing 727s and Boeing 737s, and had replaced them with Airbus A319, A320 and A321 aircraft. The TriStars were sold to Air Luxor and were replaced by Airbus A340s giving TAP an Airbus-only fleet.

In 1989, TAP became a publicly traded company (Sociedade Anónima) and their New York service moved to Newark Liberty International Airport instead of JFK and in 1991 introduce the service to Berlin. In 1993, TAP began flying to Tel Aviv. In 1994, TAP signed for a code sharing arrangement with Delta Air Lines for North Atlantic service. This agreement ended in 2005.
1996 saw the introduction of service to Boston via Terceira Island, the inauguration of service to Macau and the launch of TAP's Website. In 1997, service began to Punta Cana and Bangkok. Flights to Bangkok and Macau were discontinued in 1998.
In 2005, TAP Portugal became the 16th member of Star Alliance. TAP Air Portugal was re-branded as TAP Portugal in February 2005, employing 9,750 staff. TAP also ended its code-sharing agreement with Delta Air Lines and began a new agreement with United Airlines, as part of its membership in the Star Alliance. Under this agreement United's code (UA) is placed on TAP Portugal's transatlantic flights and some African flights, and TAP Portugal's code (TP) is placed on United flights.

In 2006, TAP Portugal signed a deal with Espírito Santo International for the acquisition of 99.81% of the Portuguese regional airline Portugália. Furthermore it started a code-sharing agreement with US Airways on all routes between Portugal and the United States with connecting services out of Newark and Philadelphia.
In 2007 TAP Portugal was awarded by NATO as the Best Engine/Aircraft Source of Repair for the NATO AWACS Maintenance Program and has been distinguished with the highest maintenance and overhaul practice awards from Airbus Industries in 1996, 2000, 2003, and 2005, being certified for full aircraft, engine and component maintenance and overhaul by the FAA, EASA, and several other important certification entities and aircraft manufacturers (Airbus, Boeing and Embraer). TAP Portugal has complete maintenance and overhaul bases in Portugal (Lisbon) and Brazil (Rio de Janeiro and Porto Alegre), and has specialized line maintenance stations in three continents: 4 in Portugal, 8 in Brazil, and 1 in Angola. It started scheduled flights to Moscow, Warsaw and Helsinki, in June 2009.
As of 2010 TAP Portugal has introduced new routes to Africa, Marrakesh & Algiers. The launch of these new routes highlights TAP's reinforcement of its growth strategy for Africa, which is the only segment in the network where the airline has continually expanded since 2001, going from 236,000 passengers to 541,000 passengers, an increase of more than 129%. With a 6.4% rise in 2009. Miami and Porto Alegre are the latest long range routes that have been announced in 2011.

In 2010 TAP Portugal was awarded the "World's Best Airline Award" by British Condé Nast Travel magazine, after being rated for its excellence in previous years, and was rated as the "Best Airline to South America" by the World Travel Awards in 2009 and 2010, with nominations for "Europe's Leading Airline" and "Europe's Leading Business Class" in 2007, 2009 and 2010. TAP Portugal has also consistently achieved high ranks and various awards from specialized air travel publications such as Skytrax and Publituris due to the company's excellence in service and performance.
According to the JACDEC Airliner Safety Report released in January 2011, TAP Portugal was rated Western Europe's safest airline and tied for fourth worldwide with three other airlines (Qantas, Air New Zealand, and Finnair). The JADEC report rates TAP Portugal well above any of its competitors in its prime geographic operating areas: Europe, Atlantic Islands, Africa, North America and South America.
In order to obtain its three-year national bailout, Portugal was forced to sell its interests in several companies, including the state-run airline. Several international operators were drawn by the airline’s strategic position, but on 18 October 2012, the Portuguese government announced a sole potential bidder for the privatized national carrier: the South American consortium Synergy Aerospace, owner of Colombian airline Avianca.[20] Portuguese financial daily Dinheiro Vivo indicated that the government would suspend privatization negotiations, if German Efromovich's Synergy Aeropsace bid was not approved

Fleet
The TAP Portugal fleet, as of December 2013, consists of the following aircraft: 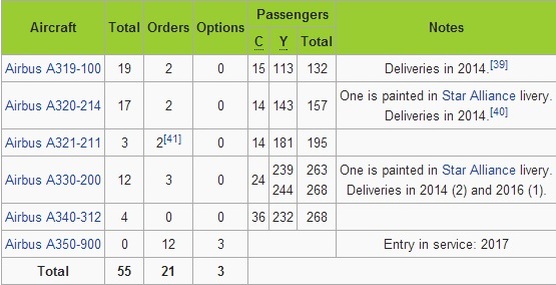