Download File
We hope you enjoy the Guide and that it will help you with your spotting at Amsterdam Airport.
Happy spotting days! 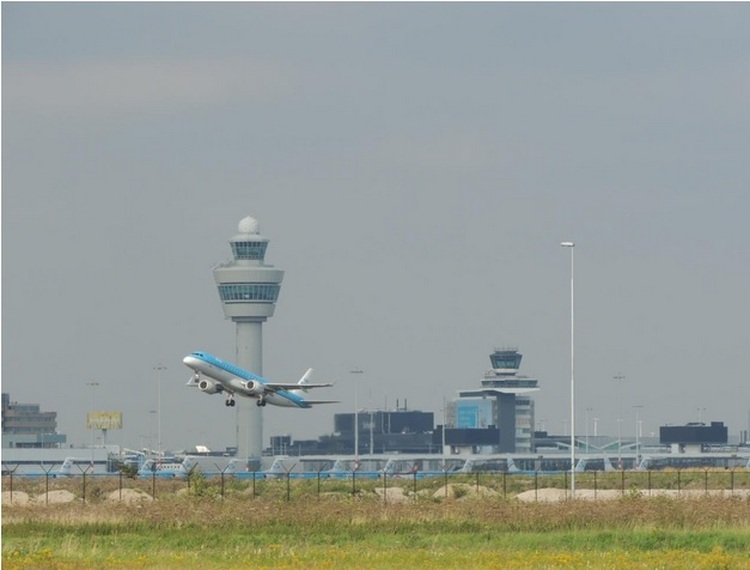 Polderbaan (36L-18R)
The Polderbaan is the most recently build runway at Schiphol and it’s located on the west side of the airport. The runway is around 3800 meters long and 75 meters wide.
The official spotting location of Schiphol Airport is at the Polderbaan, next to the Ijweg. The spotters place itself mainly is a very big parking lot with some benches on the side. On hot days an ice cream stand is present and most of the time you can buy some chips at a small snack bar that is there in the summer season. There are some toilets too. It’s a very nice place where you can talk a bit with other planespotters and you can take loads of wonderful pictures because you’re very close to all the planes taking off and landing.


There’s also a possibility to walk or cycle on a path parallel to the runway so you can watch/photograph the rotation/touchdown points of the airplanes without having to zoom in very far. On this path, some picnic tables are present on which you can sit and put your photography gear on for instance.

At runway 36L/18R it's also possible to spot at the northern side of the runway, although it’s not allowed to park here so you should go there on foot or by bike. You can get there walking/cycling to the north on the path parellel to the runway. On the end of the path you have to turn right. The adres is Schipholweg.

If from there you go further and turn right again at the first intersection you get to the other side of the Ijweg. When you arrive to the end of this path you can spot there as well. Here as well, it’s not allowed to go by car. If the police catches you, you can expect a expensive fine.

Kaagbaan (24-06)
The official spotting place was at the Kaagbaan some years ago, until it had to be removed because of the plans to build a big building for a Transport company. The runway is still accessible, although you again cannot park there. The dutch police are very strict on this and give fines really quick… You can spot at multiple places at runway 24-06. The runway is 3490 meters long and 45 meters wide. It’s now being used since 1960.

The first spotting place is at the end of the runway (06). You are standing at the top of the runway and all the airplanes come straight over your head at takeoff and landing. You cannot park here and there are no facilities. It’s just a very small piece of un-used ground and it’s next to the Kruisweg.

The second and third places are one the southern side of the runway, next to the Aalsmeerderweg and the Ragoonweg. You can reach both by car, but it’s prohibited to park there. There are no facilities on these spots, but you can get very nice pictures of planes taking off with the ATC tower in the background, as seen on the front page.

The fourth spot is on the north side of the runway. Address: Toekanweg. You can also photograph the cargo platforms of Schiphol well from here. There is a fence present though. And probably you already expected this, but you can not park here. 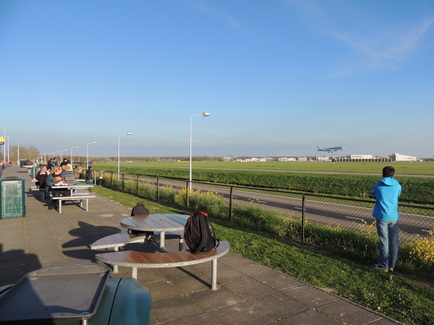 Buitenveldertbaan (27-09)
Almost every local at Amsterdam knows the spotters place at the Buitenveldertbaan. It’s located next to a McDonalds. The runway is 3450 meters long and 45 meters wide. The spot itself exists of a small pavement and a few picknicktables. There’s a parking lot owned by McDonalds where you can park your car.
Also WiFi is present inside the restaurant, but to reach this you do actually have to go inside. Of course the McDonalds also has got toilets. This is probably the only spottersplace at 27-09, but it’s a great spot to photograph both landings and takeoffs. 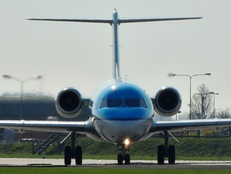 Aalsmeerbaan (36R – 18L)
The Aalsmeerbaan is 3400 meters long and 45 meters wide. At the runway there are two spotting locations. On at the north, one at the south. The one at the south is a field located close to the Anchoragelaan.The Anchoragelaan is the road that leads to the cargo platforms of Schiphol, where they load the airplanes and make them ready for departure. The spottersplace is fine, although I would say it’s better for landings instead
of takeoffs. You can reach the spottersplace by car and you can park your car on the Anchoragelaan. There are no other facilities there.

The spotting place on the north side of the runway is only suited for taking pictures of planes turning on the runway and preparing for take off. Adress: Loevesteinse Randweg 150. You can park your car at the McDonalds of the spottersplace at Buitenveldertbaan and walk from there. As you’re close to the McDonalds the amenities are closeby and just a few minutes away. On the left you can see what kind of pictures you take from the spot at the north side of the runway.
Zwanenburgbaan (18C-36C)
The Zwanenburgbaan has only got two good spotting places, as far as I know. One is located at the side of the runway, and the other at the northern side (18C).
The one at the side is at the end of a road and it's not allowed to park here. There are no facilities. The address is Zonnekruidweg, and you can reach it by bicycle or by bus, using bus number 185 or 189 and get off at stop: Schiphol, Koninklijke Marechaussee. From there you can walk to the runway. If you go by car you can park your car somewhere closeby.
The other spot at the northern side is located at a street called Tweeduizend El. The aircraft pass over your head pretty low here so you can take nice pictures of the belly of the airplanes. It’s prohibited to park here and there are no amenities. You can get there by walking from the spotters place at the Zonnekruidweg. 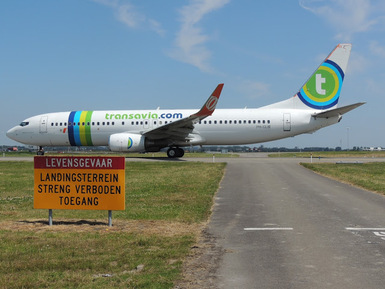 Taxiway Victor
Victor is the taxiway to and from runway 36L-18R. All the planes that landed at the Polderbaan are taxiing past you, so are the planes that are going to take off from there. You’re standing at the same level as the planes and the planes are taxiing at just 15-20 meters away from you.
As well as most of the other spotters places, you can’t park here and there are no facilities. All sorts of planes are coming past you, cargo, passengers, small and big. You can reach it by cycling from Schiphol Plaza or Hoofddorp Station, or you can go by car and park your car next to the Hoofdweg, which is closeby. On the right you can see what kind of picture you can take from the location at taxiway Victor. 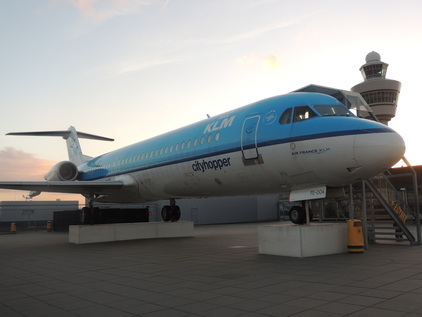 On the panoramaterrace you can see all the planes standing at the gates, and when some runways (27-09, 24-06,18L-36R) are opened, you can also see the planes taking off and landing. There also is a KLM Fokker 100 standing on the terrace, you can go inside it and there’s a timeline with the history of KLM there.

The toilets are just a few minutes walking away, inside the terminal. Also all the restaurants, snack bars and other food shops are closeby, in the terminal.
On the terrace there are some benches and picnic tables present. Also, there are some binoculars, in which you have to put 20 cents and then you can use it for a while.
The panorama terrace is also a place where you can wait for the moment you’re able to check in for your flight and therefore on sunny days it’s very busy on the terrace.
Powered by