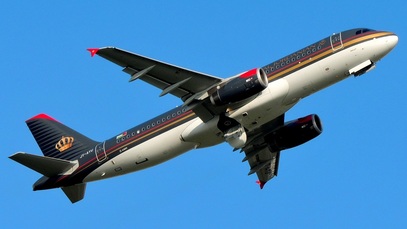 Royal Jordanian Airlines is the flag carrier of Jordan with its head office in Amman, Jordan, operating scheduled international services over four continents from its main base at Queen Alia International Airport at Amman (AMM) Jordan. Royal Jordanian (RJ) is a member of the Arab Air Carriers Organization and Oneworld; a global airline alliance. Royal Jordanian won the Centre for Asia Pacific Aviation award for "Airline Turnaround of the Year 2006" on 9 November 2006. The airline operates over 500 flights per week, with at least 110 daily departures. Royal Jordanian was voted "Airline of the Year 2007" by Airfinance Journal. 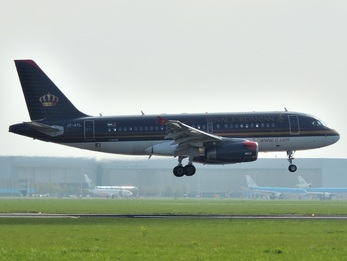 The airline was established on 9 December 1963 and started operations on 15 December 1963 after a royal decree by the late King Hussein. It was named Alia (or Aalya) after King Hussein's eldest child, Princess Alia bint Al Hussein of Jordan (born on 13 February 1956). It is a common misconception that the airline was named after the King's third wife, Queen Alia whom King Hussein did not marry until 1972. The airline was founded with capital from private shareholders but the Jordanian government later took over the company.

Alia (the Royal Jordanian Airline) started operations with two Handley Page Dart Heralds and a Douglas DC-7 aircraft, serving Kuwait City, Beirut and Cairo from Amman. In 1964, another DC-7 was added and service began to Jeddah. In 1965, Alia initiated service to Rome, its first destination in Europe. The progress made by the airline was threatened by an Israeli air raid during the 1967 Arab-Israeli War when the DC-7 aircraft were destroyed. They were replaced by two Fokker F-27 airliners. In 1968, the airline expanded its route pattern to Nicosia, Benghazi, Dhahran and Doha. 1969 saw the addition of service to Munich, Istanbul and Tehran.In 1970, Alia joined the jet age when they phased out the F-27s and ordered Boeing 707 aircraft. Frankfurt and Abu Dhabi were added to the network. The 707s were delivered in 1971. In that year, service was initiated to Madrid, Copenhagen and Karachi. During the rest of the decade, Boeing 720/727s and Boeing 747s were added to the fleet. A catering department was established, and duty-free shops were opened at Amman airport. Services were added to destinations including: Bahrain, Dubai, Muscat, Rabat, Geneva, Amsterdam, Baghdad, Bangkok, Vienna, Larnaca replacing Nicosia, Damascus, New York City, Houston, and Ras al-Khaimah.

In 1979, Alia became a founding member of the Arab Airlines Technical Consortium (AATC).In the 1980s, Tunis and Tripoli joined the route map, and Alia's IBM computer center was inaugurated. Lockheed L-1011s, Airbus A310s and Airbus A320s joined the fleet. In 1986, Alia changed its name to Royal Jordanian. The airline's first woman pilot flew one of their aircraft during this decade. Service was added to Belgrade, Chicago, Los Angeles, Miami, Bucharest, Singapore, Riyadh, Kuala Lumpur – in cooperation with MAS, Sana'a, Moscow, Montreal, Delhi, Calcutta and Ankara. This decade also saw the introduction of the Gabriel Automated Ticket System – (GATS).The 1990s saw further expansion. Royal Jordanian and nine other Arab air carriers signed up for the Galileo CRS. The IMCS maintenance and engineering system was added, a new Amman city air terminal was opened at the 7th Circle of the Jordanian capital, and services to Rafah started, since then halted. The cities of Toronto, Colombo, Jakarta, Berlin, Mumbai, Milan and Tel Aviv were added to the network. In November, 1997 Royal Jordanian became a code-sharing partner with the US carrier TWA and eventually moved operations into the TWA Flight Center (Terminal 5) at the John F. Kennedy International Airport in New York.In 2000, the U.S. Federal Aviation Administration (FAA) renewed the airline's maintenance and engineering department's license. The duty-free shop was among the services to be privatised. A holding company, RJI, wholly owned by the government, was incorporated as a public limited company in February 2001 to hold all the airline's and associated investments. The airline's name was changed on 5 February 2001 to Alia – The Royal Jordanian Airlines Company, although travellers still use the popular name of Royal Jordanian.

On 10 February 1996, the flag carrier's subsidiary Royal Wings started its first domestic service to Aqaba, the seaport on the Gulf of Aqaba, using a Fokker F-27. Royal Wings now operates an Airbus A320-212 aircraft on both scheduled and charter services to destinations in Egypt, Cyprus and Israel.On 20 December 2006, Royal Jordanian announced that they would replace two Airbus A321s with two new units, and order four new Airbus A319s to enter service in early 2008.In April 2007, Royal Jordanian became part of Oneworld, thus becoming the first Arab airline to join such a global alliance system. The following month, the airline announced an order for a total of 10 Boeing 787 Dreamliners, for service entry in 2010. This is the first order Royal Jordanian has placed with Boeing. Montreal, Canada, rejoined the network on 25 May 2007, after the route was cancelled in 1997. Also during May, Royal Jordanian was the sponsor of the World Economic Forum, which was held at the Dead Sea, Jordan.On 11 July 2007, Royal Jordanian celebrated thirty years of non-stop service between Amman and New York City, making it the longest serving Arab airline to this gateway to the U.S.. RJ won the "Airline Strategy Award" in the technology category at the sixth annual Airline Strategy Awards on 16 July 2007. On 23 July, RJ saw the introduction of cargo flights, Damascus being the first destination served from Amman, using a Boeing 737.Royal Jordanian made its first flight to Budapest, on 28 July, using an Embraer 195. In October, RJ announced the switch of two Embraer 195 jets of its original order to two Embraer 175 jets. Royal Jordanian opened a new lounge at King Hussein International Airport in Aqaba.RJ will be the first Middle East airline to provide its passengers with OnAir’s in-flight Internet and mobile phone services, including e-mail, SMS and voice calls. Royal Jordanian has upgraded its three Airbus A310s at a cost of over 10 million Jordanian dinars (JOD).Royal Jordanian was privatised at the end of 2007, resulting in 71% of its assets being sold. The market capitalisation of the company stands at 260 million JOD, and share-trading commenced on 17 December 2007.On 24 December 2007, Royal Jordanian confirmed Baku as one of its new destinations for 2008, using an Embraer 195 twice weekly from Amman. In early 2008, however, RJ officials decided against the new route, citing that high fuel prices and a new market were a risk too large to take at that time. Royal Jordanian plans to operate the Amman-Baku route in late 2009 or early 2010. On 22 January 2008, RJ launched flights to Hong Kong via Bangkok, with three flights/week during winter, and five flights/week during summer, making it the airline's first route to China.

The Airbus A319 entered service on 13 March 2008, making RJ the first Middle East airline to operate three aircraft of the Airbus A320 family. On 17 August 2008, Royal Jordanian opened a new route to Kiev, using Embraer 195 jets for this twice weekly service. On 24 August 2008, Royal Jordanian opened its new lounge at Queen Alia International Airport Amman, replacing the "Petra" and "Jerash" lounges. The new lounge is located on the second floor of the South Terminal and is the second-largest airport lounge in the Middle East, being able to handle over 340 passengers.The airline recorded an 18% increase in passenger numbers in July 2008. With the airline transporting 278,000 passengers, the seat factor grew by 5% in that month to reach 81%. As part of Royal Jordanian's commitment to its airline alliance Oneworld, an announcement was made at the alliance's 10th birthday celebrations on 3 February 2009 that RJ would paint its new A319 (due for delivery in late March) in a scheme that would be based around the Oneworld name and logo. This is the first special colour scheme Royal Jordanian will have used.Royal Jordanian resumed service to Brussels on 1 April 2009, six years after the route was discontinued by the airline, flying twice weekly from Amman with the airline planning to add a further two flights per week later in 2009.On 28 March 2010, Royal Jordanian inaugurated regular direct flights to Madinah Munawwarah, Saudi Arabia, with four weekly flights. On the 23 March, Royal Jordanian confirmed that it had ordered two A330-200s and one Embraer 175. Royal Jordanian recommenced operations to Malaysia's capital Kuala Lumpur on June 2, 2010 after it had suspended this route in 2004. Aircraft used on this route is the new Airbus A330-200.In May 2011, Royal Jordanian announced that they will retire the Airbus A310 aircraft in December 2011, and January 2012. Royal Jordanian uses an Airbus A330 and an Airbus A321 for non-stop flights London.(Terminal 3).The first of Royal Jordanian's Boeing 787 Dreamliner aircraft (267-seat, two-class configuration) is due to enter service on 1 July 2014, initially linking Amman with Jeddah, Saudi Arabia.

Fleet
The Royal Jordanian fleet consists of the following aircraft: 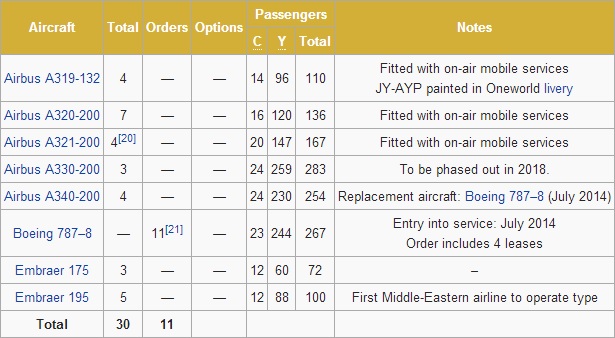