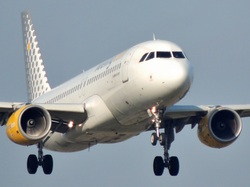 Vueling serves over 100 destinations in Africa, Asia and Europe and is currently the second largest airline in Spain. In 2012, the airline carried nearly 14.8 million passengers (an increase of 20.1% from 2011), with a load factor of 77.7%.

History
Early years
Vueling was established in February 2004 and commenced operations on 1 July 2004 with a flight between Barcelona and Ibiza. The initial fleet consisted of two Airbus A320 aircraft, based in Barcelona serving Brussels, Ibiza, Palma de Mallorca and Paris-Charles de Gaulle.

Initially, major shareholders of Vueling Airlines were Apax Partners (40%), Inversiones Hemisferio (Grupo Planeta) (30%), Vueling's management team (23%) and V.A. Investor (JetBlue Airways) (7%). During its nascent stages, the company's general manager was Lázaro Ros, while Carlos Muñoz was CEO. In November 2007, Vueling appointed managing director of Spanair Lars Nygaard as CEO to replace Carlos Muñoz, who remained as a member of the Board of Directors.

Madrid was added as the airline's second base in 2005, followed by their first base outside Spain at Paris Charles de Gaulle in 2007. Seville followed in December 2007.

Financial concerns and management re-shuffle
2007 was a difficult year for Vueling; Apax Partners sold their then 21% stake in the carrier in June of that year, followed by two profit warnings issued in August and October. Two company directors and the chairman resigned shortly before the second profit warning, citing differences over commercial strategy. Shares in the company were also temporarily suspended.

This led to Barbara Cassani, former Chief Executive of UK low-cost airline Go Fly, joining Vueling as chairman of the board in September 2007. The airline then embarked on a restructuring exercise and posted its first profit in mid-2009. 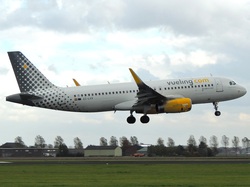 Vueling and Clickair merger
In June 2008, Vueling and rival Spanish low cost airline Clickair announced their intention to merge. The merger was designed to create a carrier better able to compete in the competitive Spanish airline market and mitigate high fuel costs with Iberia as the main industrial partner. While the new company would trade under the Vueling name, Clickair's Alex Cruz was named as chief executive.

The deal was subject to scrutiny and approval by European competition regulators, who were concerned that the merged airline would have a significant competitive advantage on around 19 routes. The regulators demanded the release of slots at Barcelona and other European airports as a condition of the merger.

On 15 July 2009 the merger of Vueling and Clickair was completed. The new merged airline operates under the Vueling brand, with Clickair flights and aircraft re-branded under the Vueling name. It became the second largest Spanish carrier flying 8.2 million passengers in 2009, to almost 50 destinations.

Co-operation with MTV
In 2009, Vueling for the second year running co-operated with MTV during the summer season. Two of Vueling's A320 aircraft (EC-KDG and EC-KDH) were re-painted into MTV liveries with some MTV styling on-board too. The designs of both liveries were created by Custo Dalmau and both liveries were removed at the end of 2009. In the summer season of 2010, EC-KDG had again been re-painted into an MTV livery, and in 2011 it was re-painted into a livery based on the DJ and producer David Guetta - The livery has since been removed and co-operation with MTV has since ended. 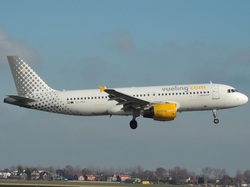 Recent developments
In November 2010, Vueling announced a new base at Toulouse Airport in France from April 2011, followed in December 2010 by the announcement of a new base in Amsterdam, also to open during April 2011. The Toulouse base opened on 23 April 2011, but has closed.

In January 2011 further expansion was announced with Vueling adding a further nine aircraft to its fleet, including Airbus A319 aircraft. Six Airbus A320s were delivered between April and June 2011, whilst the remaining two A320s were delivered by the end of 2011.
On 21 March 2012 it was announced by CEO Alex Cruz that Rome would be added as a new base. The base launched on 25 March 2012 with one aircraft based there, the airline has since expanded at Rome with numerous new destinations.
On 5 December 2012, Vueling announced the opening of a new base of operations in Florence, the carrier is to base one aircraft there and serve four new European destinations.
On 25 October 2013, Vueling opens its first Italian domestic route: Florence-Catania.
On 6 November 2013, Vueling announced a new base with one aircraft in Brussels, with 7 new destinations from May 2014, coming in addition to the four existing destinations.
The airline has since focused expansion on its hub at Barcelona and continues to grow there rapidly along with creating new routes at most bases.
On 20 November 2013 Vueling announced further expansion from Florence: it will be based a 2nd Airbus A319 and it will open new routes to Bari, Cagliari, Catania, Ibiza, Mykonos, Santorini and Palermo.

All information on this page was taken from Wikipedia. All copyright belongs to them.
Powered by