Icelandair is the main airline of Iceland, headquartered at Reykjavík Airport in Reykjavík. It is part of the Icelandair Group and currently operates scheduled services to 35 cities in 16 countries on both sides of the Atlantic Ocean out of its hub at Keflavík International Airport. The geographical position of Iceland allows one-stop transatlantic flights, which are one pillar of the airline's business strategy, along with traffic to and from the country.
In 2012, Icelandair transported 2,021,000 passengers, an increase of 16% compared to 2011. 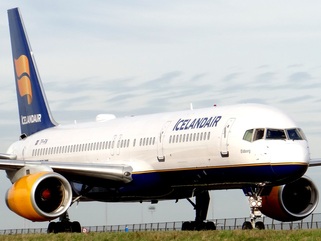 History
Flugfélag Íslands in the early decades
Icelandair traces its roots back to 1937, when Flugfélag Akureyrar was founded in Akureyri on the north coast of Iceland. Flight operations started in 1938 with a single floatplane of the type Waco YKS-7. In 1939 the airline had to be grounded when the aircraft was destroyed in a capsizing accident. The company moved to Reykjavík, where it acquired another Waco aircraft and was re-launched in 1940 as Flugfélag Íslands, which translates as Flight Company of Iceland. Previously, two unrelated airlines of the same name had existed in the country (from 1919 to 1920, and between 1928 and 1931). For international purposes, the name Iceland Airways was adopted.

The fleet was expanded with a Beechcraft Model 18 in 1942, and with two de Havilland Dragon Rapide as well as one U.S.-made Consolidated PBY Catalina in 1944, the latter being the first ever aircraft registered in Iceland to be flown to Iceland by an Icelandic crew from North America. On 11 July 1945, this aircraft operated the first commercial flight over the Atlantic Ocean for the airline, which led from Reykjavík to Largs in Scotland, with four passengers and four crew members on board. Regular flights to Prestwick Airport, Scotland and Copenhagen in Denmark, using B-24 Liberator aircraft leased from Scottish Airlines were launched in 1946.

In the same year, comfort and performance of domestic flights in Iceland could be improved with the introduction of the Douglas DC-3 Dakota. A total of six airliners of that type had been purchased, which remained in service with the airline until 1972, the oldest one being still flightworthy as of 2011. Until the late 1960s, Flugfélag concentrated mostly on domestic flights, where it initially faced fierce competition from Loftleiðir, another airline which had been founded in 1944. When a merger proposal of the Icelandic government was rejected by the two airlines, the domestic routes were split among them as a measure to ease competition. When Loftleiðir pulled out of the domestic market in 1952 to fully concentrate on international flights, Flugfélag became the main domestic carrier of the country.

International services stayed part of the business model of Flugfélag, though to a far lesser extent compared to Loftleiðir. In 1948, the Douglas C-54 Skymaster was introduced on those routes, and in 1957 two new Vickers 759 Viscounts were acquired, the first turboprop airliners to be operated by an Icelandic airline. In the 1950s, Flugfélag began to use the Icelandair branding for its international flights.

In 1967, Flugfélag was the first Icelandic airline to join the jet age, when a Boeing 727 dubbed Gullfaxi was put into service. Another 727 was acquired in 1971, and the aircraft type was operated until 1990. In 2008, the cockpit section of the Gullfaxi was put on display at the Akureyri Aviation Museum.

Loftleiðir
Another company called Loftleiðir had been formed in 1944 by three young pilots returning from their flight training in Canada. Their company, whose name roughly means "Skyways", concentrated on Icelandic domestic air services for the first few years. The first planes used were two Stinson Reliants, and then a Grumman Goose amphibious aircraft.

At first, Loftleiðir, like Flugfélag Íslands, concentrated on domestic air services. Loftleiðir began scheduled international operations in 1947.
By 1952, the Icelandic authorities were very worried that fierce competition between both Icelandic airlines would ruin both companies, and attempted to force a merger between them. This did not happen at the time, but instead the authorities split up the domestic routes between the two airlines. As a result, Loftleiðir ceased domestic flights in Iceland entirely, concentrating instead on international flights. Loftleiðir's pioneering low-fare services across the North-Atlantic then commenced in 1953. In a way, Loftleiðir can even be considered a sort of precursor of the low-cost carriers that started operating in the 1970s. This made them a popular airline for travel between Europe and North America.

The late 1960s were an exciting time for Loftleiðir. In 1969 the company acquired Air Bahama, a small airline operating out of the Bahamas, and a year later Loftleiðir became one of the founders of Cargolux, a cargo airline. Also in 1970, Loftleiðir entered the jet age with its first two Douglas DC-8 aircraft.

During those years, Loftleiðir were often referred to, even by the company's own staff, as "the Hippie Airline" or even "the Hippie Express". Loftleiðir were not famous for speed or punctuality, but flying with the company became a sort of rite of passage for young "hippies" from America travelling to Europe, one of whom was Bill Clinton, later US President.

Merger with Loftleiðir
During the 1970s energy crisis, the economic situation for both Flugfélag and Loftleiðir worsened. The government of Iceland initiated a new attempt to merge the two airlines, which could be realized in 1973 following lengthy negotiations. Especially the staff of Loftleiðir complained that Flugfélag, although smaller, would have gained the upper hand. A holding company called Flugleiðir was created, which combined the two companies and began to streamline staff and operations. At the time of the merger, two thirds of the passenger traffic of the airline were international transatlantic crossings, and Flugfélag's fleet of DC-3s and 727s was enlarged by DC-8s of Loftleiðir. In 1979, Flugfélag bought all of Loftleiðir's assets in Flugleiðir, and the airline became known by today's Icelandair.

Post-merger Icelandair
The aircraft fleet of Icelandair remained mainly unchanged until the Boeing 757-200 became the new backbone for transatlantic flights during the 1990s. The domestic Fokker F-27s were replaced by F-50s and Boeing 737s deployed on European routes. The European hub at Luxemburg-Findel Airport had been taken over from Loftleiðir. Passenger count topped one million in 1995 as the company's business grew on a reputation as a "backpacker airline", similar to Loftleiðir, which had been referred to as "Hippie Airline" since the late 1960s. In the same year, it was begun to dismantle the Luxemburg hub in favor of today's decentralized European network, linking the largest cities non-stop to Reykjavík.

In 1997 the domestic operations of Icelandair, part of which had previously been operated under the Flugfélag Nordurlands branding, were combined with small airline Nordurflug to form the Air Iceland subsidiary, allowing mainline Icelandair to fully concentrate on international flights since then. In 1999, a new aircraft livery was introduced, as part of an image campaign designed to retire Icelandair's "backpacker" label in favor of an emphasis on business travel. From 2001, the Icelandair hub was moved to Keflavík International Airport. As Icelandair particularly focuses on flights to North America, the company was significantly affected by the airspace closure following the September 11 attacks in the same year.

The Flugleiðir holding was reorganized as Icelandair Group (for aviation business) and FL Group (for non-aviation finance and investment business) between 2002 and 2005, with Icelandair becoming the largest and most important of eleven subsidiaries. The wet-lease and charter department, which was founded in 2003, was named Loftleiðir Icelandic, thus re-introducing a familiar name.

Developments since 2010
Icelandair was hit hard by the air traffic restrictions following the 2010 eruptions of Eyjafjallajökull, which resulted in large parts of the European airspace being closed down. The air travel disruption coincided with the start of the important summer season for the company. The in-house crisis management organization began assessing the situation once the scale had become known. Triple-daily crisis meetings were held at the airline's headquarters. Icelandair tried to operate as many passenger flights as possible, keeping its hub at Keflavík open and diverting European flights to airports that were still open, such as Glasgow International Airport or Trondheim Airport. The eventual closure of Keflavík due to the volcanic ash cloud coincided with an improvement of the situation towards Europe, which allowed Icelandair to move its headquarters with 200 staff to Glasgow and operate flights from there for ten days, with shuttle flights to Iceland's Akureyri Airport and round-the-clock bus shuttles onwards to Reykjavík.

In the aftermath of the eruption, the government of Iceland launched the successful "Inspired by Iceland" campaign to regain confidence in travelling to Iceland for tourists and business people, of which Icelandair was a leading participant and initiator.
When the Grímsvötn volcano erupted in 2011, Icelandair once again had to cope with airspace closures in Europe, though this time to a lesser extent due to a higher level of political preparedness. Weekly newspaper The Economist claimed that Icelandair could even take advantage when catering for disaster tourists.

In February 2011 Icelandair was chosen "The Knowledge Company" of the year and Icelandair CEO Birkir Hólm Guðnason was picked as "Man of the Year" in the Icelandic business community. In both categories the panel of judges of the Association of Economists and Business Graduates in Iceland said that "the fine results of the company in the previous year showed both a high degree of skill and specialist knowledge within the company as well as excellent leadership." In October of the same year, the airline was awarded the title "Marketing Firm of the Year in Iceland", by a judging panel from IMARK, the Marketing Association in Iceland.

After having launched scheduled flights to Washington D.C. in 2011, Denver was announced as new U.S. destination for 2012, followed by Anchorage in 2013, bringing the total number of cities served in the country up to eight, along with Boston, Minneapolis, New York City, Orlando and Seattle. Also in 2012, Icelandair resumed domestic services, with regular flights to link Akureyri to its Keflavík hub through its subsidiary company Air Iceland.

New order
On February 13, 2013 Icelandair Group announced that the company had finalized an order with Boeing for sixteen new Boeing 737 MAX planes. Purchase rights for eight additional 737s had also been signed. The value for all sixteen aircraft was USD 1.6 billion at Boeing list prices, but actual purchase price was confidential. The planes will be delivered in 2018-2021. In a press release from Icelandair Group Björgólfur Jóhannsson, president and CEO of the company enthused: “We are pleased to announce that we have finalized agreements on firm orders for 737 MAX. This will further strengthen our business and increase our flexibility and capability for growth. The first aircraft is scheduled to be delivered in the first half of 2018 and the aircraft will be operated alongside with the Company’s current fleet of Boeing 757s.”

The order is for nine 737 MAX 8 airplanes for 153 passengers and seven 737 MAX 9 aircraft which hold 172 passengers. In comparison Icelandair Group’s current Boeing 757-200 aircraft hold 183 passengers. Boeing 737 MAX is a new, improved and longer version of the present Boeing 737s. Fuel savings compared to Icelandair's present fleet of Boeing 757s is held to be more than 20% per seat.

Fleet
As of November 2013, the Icelandair fleet consists of the following aircraft, with an average age of 18.2 years:

All information on this page was taken from Wikipedia. All copyright belongs to them.
Powered by