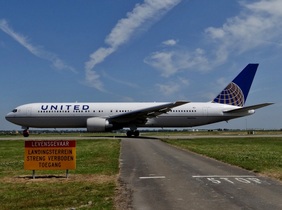 United Airlines, Inc. (commonly referred to simply as "United") is an American major airline headquartered in Chicago, Illinois. United is a wholly owned subsidiary of United Continental Holdings following a $3 billion merger in 2010. The airline was previously owned, at one point in its history, by The Boeing Company, one of the world's largest aircraft manufacturers. Since its merger with Continental Airlines, the company boasts more revenue passenger miles than any airline in the world.

United operates out of 10 (Cleveland ends June 2014) airline hubs in the continental United States, Guam, and Japan. George Bush Intercontinental Airport in Houston is United's largest passenger carrying hub handling 16.6 million passengers annually with an average of 45,413 passengers daily. The company employs over 88,500 people while maintaining its headquarters in Chicago's Willis Tower (formerly known as Sears Tower). Through the airline's parent company, United Continental Holdings, it is publicly traded under NYSE: UAL with a market capitalization of over $10.5 billion as of October, 2013.

United's main competitors in its domestic market are major airlines Delta and American. United is using Continental's air operating certificate and it surrendered its original certificate when the merger closed. 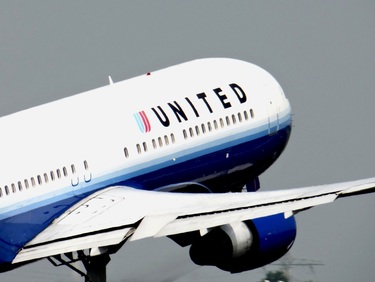 In 1933, United began operating the Boeing 247, the first all-metal airliner. It was able to fly a transcontinental flight in 20 hours, making it significantly faster than its predecessors. After passage of the Air Mail Act in 1934, UATC separated into United Aircraft (the future United Technologies), the Boeing Airplane Company and United Air Lines.

After the war, United gained from a boom in customer demand for air travel, with its revenue passenger-miles jumping five-fold in the 1950s, and continued growth occurring through the next two decades.
In 1954 United Airlines became the first airline to purchase modern flight simulators which had visual, sound and motion cues for training pilots. Purchased for US$3 million (1954) from Curtiss-Wright, these were the first of today's modern flight simulators for training of commercial passenger aircraft pilots.

United merged with Capital Airlines in 1961 and regained its position as the United States' largest airline. In 1968, the company reorganized, creating UAL Corporation, with United Airlines as a wholly owned subsidiary. In 1970, the UAL Corporation acquired Western International Hotels, and its name was later changed to Westin Hotel Company. The 1970s also saw economic turmoil, resulting in "stagflation" and labor unrest. The 1978 Airline Deregulation Act, resulting in industry shakeups, further added to the carrier's difficulties in a loss-making period.

In 1982, United became the first carrier to operate the Boeing 767, taking its first delivery of 767-200s on August 19. In May 1985, the airline underwent a 29-day pilot strike over management's proposed "B-scale" pilot pay rates. Then-company CEO Richard Ferris changed United's parent company's name from UAL Corporation to Allegis in February 1987, but following his termination, the company reverted to the name UAL Corp. in May 1988, and divested non-airline properties.

In 1985, United expanded dramatically by purchasing Pan Am's entire Pacific Division, giving it a hub at Tokyo's Narita International Airport, and in 1991 purchased routes to London Heathrow Airport from ailing Pan Am, making it one of two US carriers permitted exclusive access to Heathrow under Bermuda II until "open skies" took effect in 2008 (American Airlines being the other, after purchasing TWA's Heathrow landing slots). The aftermath of the Gulf War and increased competition from low-cost carriers led to losses in 1991 and 1992. In 1994, United's pilots, machinists, bag handlers and non-contract employees agreed to an Employee Stock Ownership Plan (ESOP), acquiring 55% of company stock in exchange for 15–25% salary concessions, making the carrier the largest employee-owned corporation in the world. The carrier also launched a low-cost subsidiary in 1994, Shuttle by United a high frequency, west coast-based operation, in an attempt to compete with low-cost carriers; the subsidiary remained in operation until 2001.

In 1995, United became the first airline to introduce the Boeing 777 in commercial service. In 1997, United co-founded the Star Alliance airline partnership. In May 2000, United announced a planned US$11.6 billion acquisition of US Airways, but withdrew the offer in July 2001 before the United States Department of Justice barred the merger on antitrust grounds. May 2000 also saw a bitter contract dispute between United and its pilots' union over pay cuts and concessions to fund the ESOP and overtime work, causing summer flight cancellations until a salary increase was agreed upon.

During the September 11, 2001 attacks, two of the four airplanes hijacked and crashed by al-Qaeda members were United Airlines aircraft. An airline industry downturn resulted, and coupled with economic difficulties, skyrocketing oil prices, and higher labor costs, the company lost US$2.14 billion in 2001. In the same year United applied for a US$1.5 billion loan guarantee from the federal Air Transportation Stabilization Board established in the wake of the September 11 attacks. After attempts to secure additional capital failed, UAL Corporation filed for Chapter 11 bankruptcy protection in December 2002 and the ESOP was terminated.

In 2005, United announced it had raised US$3 billion in financing to exit bankruptcy and filed its Plan of Reorganization, as announced, on September 7, 2005. In late 2006, Continental Airlines participated in preliminary merger discussions with United. On June 4, 2008, United announced it would close its Ted unit and reconfigure the subsidiary's aircraft for a return to mainline configuration.

On April 16, 2010, United resumed merger talks with Continental Airlines. (The two airlines had previously discussed merging in 2008.) The board of directors of both Continental and UAL Corporation's United Airlines reached an agreement to combine operations on May 2, 2010. The combined carrier would retain the United Airlines name, but use Continental's logo and livery, and Continental's CEO Jeff Smisek would head the new company. The merger was contingent upon shareholder and regulatory approval.

The Continental–United merger was approved by the European Commission in July 2010 and by the US Justice Department on August 27, 2010. On September 17, 2010, United's shareholders approved the merger deal with Continental Airlines. Both carriers planned to begin merging operations in 2011 to form the world's biggest carrier. On October 1, 2010, UAL Corporation completed its merger with Continental Airlines and changed its name to United Continental Holdings, Inc. The airline received a single operating certificate from the FAA on November 30, 2011. On March 3, 2012, Continental and United merged their passenger service systems, frequent-flier programs, and websites which officially eliminated the Continental name and brand as far as the public was concerned.

Predecessors
A heritage United Airbus A320, painted in the 1970s "Stars and Bars", taxiing at Denver International Airport in June 2012
United Airlines is a combination of a number of air carriers that merged with each other starting in the 1930s with the most recent merger concerning Continental Airlines (which had previously merged with or acquired several airlines during its history) thus reflecting changes in focus of both United and the U.S. air transport market.

Predecessor air carriers that form the present United Airlines include:

Fleet
United Airlines operates 708 mainline aircraft, with an average age of 13.6 years. As of April 2014, its fleet consists of the following aircraft. 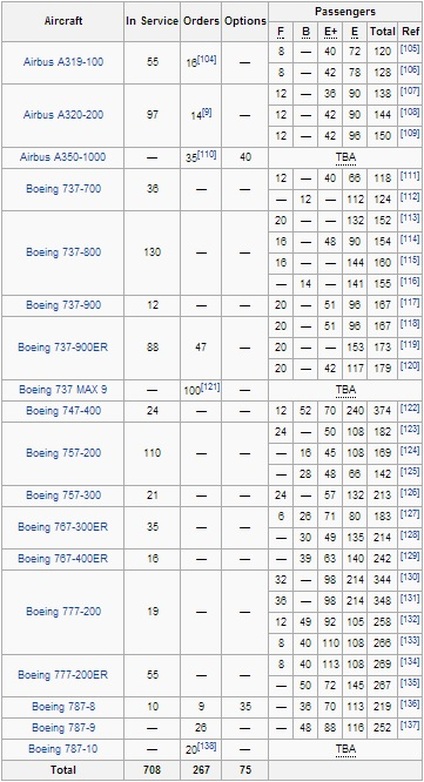