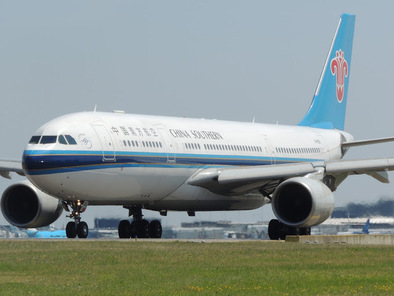 China Southern Airlines Company Limited is an airline headquartered in Baiyun District, Guangzhou, Guangdong Province, People's Republic of China. It is the world's sixth-largest airline measured by passengers carried and Asia's largest airline in fleet size and passengers carried. It is the fourth-largest airline in the world in domestic passenger traffic and the sixth-largest in scheduled domestic passenger-kilometres flown. From its main hubs at Guangzhou Baiyun International Airport and Beijing Capital International Airport, the airline flies to 193 destinations using a fleet of more than 400 aircraft.
China Southern Airlines was established on 1 July 1988 following the restructuring of the Civil Aviation Administration of China.


Since then, it acquired and merged with a number of domestic airlines, becoming one of China's "Big Three" airlines (alongside Air China and China Eastern Airlines). China Southern Airlines is a member of SkyTeam. The airlines's logo is a red kapok on a blue vertical tail fin.
In 2012, China Southern Airlines carried 86.5 million domestic and international passengers with an average load factor of 81%. 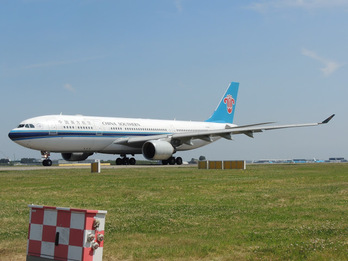 History
Founding
China Southern Airlines was established in 1988, following the government's decision to split the operating divisions of Civil Aviation Administration of China (CAAC) into separate airlines. The CAAC was restructured in late 1984 and divided into four major airlines, among which was China Southern Airlines, which became a separate identity on 1 July 1988. with operations starting in 1989. Although controlled by the CAAC, China Southern quickly established relationships with Western companies; in 1990, it launched a maintenance joint-venture with Hong Kong-based Hutchison Whampoa and Lockheed called Guangzhou Aircraft Maintenance Engineering Co. (GAMECO). During 1991, 6 million passengers were carried, and with 38 Boeing jet airliners, China Southern was serving 90 domestic cities and 17 international destinations. In 1992, the airline raised US$537 million in revenue and posted a $102 million profits; on 17 December 1992, China Southern signed an order for six Boeing 777s, split between four standard −200 series and two longer-range −200ERs. China Southern, with a number of Chinese airlines, was granted financial independence during the year, with a resultant drawback being the purchase of fuel and airport fees.

Foreign investments
In 1994, the Chinese government opened the possibility foreign investments in its airlines; China Southern and United Airlines quickly started talks on the matter. To raise its operating standards and distance itself from mostly unprofitable second- and third-tiers domestic airlines, the carrier signed agreements with a number of U.S. carriers regarding staff training and aircraft maintenance, with the ultimate aim of being listed on the New York Stock Exchange. Revenue for the year doubled, although profits did not increase significantly due to the costs associated with the airline's growth.

The first of the six Boeing 777s arrived on 28 December 1995, making China Southern Airlines the first Asian carrier to operate the type. Its first long-haul route, Guangzhou–Beijing–Amsterdam, was launched in 1996. The following year, China Southern was the first to place its Boeing 777s into non-stop services across the Pacific Ocean, connecting Guangzhou and Los Angeles. Three years later, Boeing 777's were deployed to Sydney and Melbourne. Despite the airline's effort on raising international capacity from the start, domestic traffic made up 80% of the airline's revenue. As a result, it signed a codeshare agreement during the mid-1990s to further increase international traffic.

In order to keep pace with fast developments, China Southern Airlines entered the capital market to optimise its financial structure. The airline successfully listed on the Hong Kong and New York Stock Exchanges in July 1997, raising $600–$700 million. It followed up in 2003 at the Shanghai Stock Exchange. 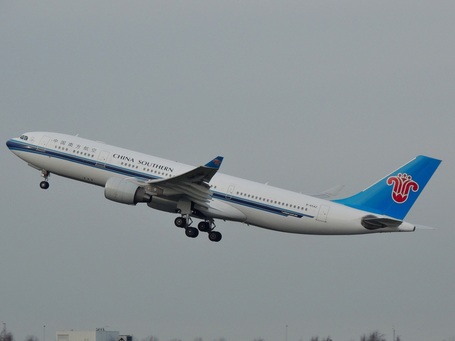 Mergers and acquisitions
In July 2000, the CAAC announced that the ten airlines under its direct management will be merged into three airline groups, revolving around Air China, China Eastern Airlines and China Southern itself. On 4 August, China Southern absorbed Zhongyuan Airlines. The following year it acquired China Northern Airlines and China Xinjiang Airlines. In 2004, the merger was completed. As a result, China Southern Airlines became one of the "Big Three" carriers in the country. Since then, it has successively taken over shareholding stocks and joined the equity in numerous Chinese carriers. The airline is the major shareholder of Xiamen Airlines (51%) and Chongqing Airlines (60%). It also invests in Sichuan Airlines.

On 29 September 2003, the airline placed an order with Airbus for 4 Trent 700-powered Airbus A330-200s, to be delivered from 2005. This was part of the order placed in April by the China Aviation Supplies Imp. & Exp. Group covering 30 aircraft. The first example was delivered on 28 February 2005, thereby giving China Southern the title of the first mainland Chinese A330 operator. One month earlier, on 28 January 2005, the airline placed a commitment order for 5 Airbus A380-800s, becoming the first Chinese airline to so, with delivery in time for the 2008 Summer Olympics. Ironically, PRC officials also placed an order for 60 7E7s on the same day for six airlines. The aircraft would be delivered between 2008 and 2010. However, due to delivery delays, the aircraft was not delivered in time for the Olympics and as of May 2010, the first of the aircraft are scheduled to arrive sometime in 2011. Boeing used the event to official designate the aircraft the Boeing 787.

On the same day, a China Southern Airlines Boeing 777–200 originating from Guangzhou Baiyun International Airport landed in Taipei, becoming the first mainland Chinese to land in the Republic of China since 1949, when the Kuomintang were involved in the war with the Communist Party of China. The flight carried 234 passengers home after the Lunar New Year. Within three years, in July 2008, a China Southern Airlines Airbus A330 carrying 230 tourists again landed in Taipei. The governments of the two countries agreed to allow directs flights between the countries in June, ending six-decades of limited air travel between the two sides. Following the flight, China Southern Airlines Chairman and pilot of the flight, Liu Shaoyong, said, "From today onward, regular commercial flights will replace the rumbling warplanes over the skies of the Taiwan Strait, and relations between the two sides will become better and better. "

Recent developments
During 2009, China Southern Airlines remodeled its strategy from a point to point hub to a full hub and spoke carrier, which has been proven successful. Along with that, the airline has rapidly expanded its international market share, particularly in Australia, where passenger numbers in 2011 have been 97% greater than in 2010.
On 21 January 2010, China Southern Airlines announced an order for an additional 20 A320-200s, scheduled for delivery from 2011, due to the falling fuel costs and surging passenger demand.

Fleet
The China Southern Airlines Passenger fleet consists of the following aircraft (as of April 2014): 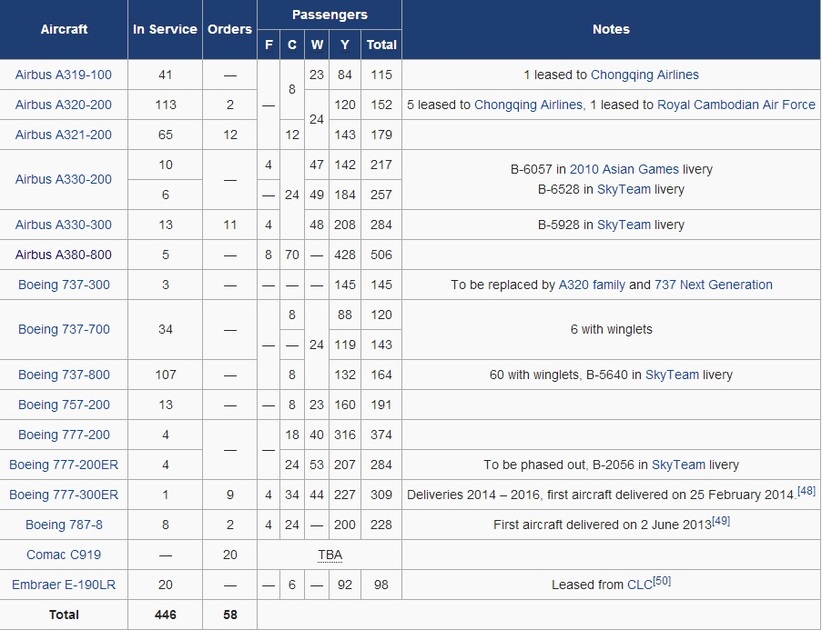