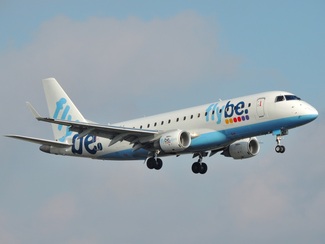 Flybe Group PLC is a British low-cost regional airline group based in Exeter, Devon, England. It operates over 180 routes to 65 European airports and is Europe's largest regional airline, carrying over 7 million passengers during 2013. The Flybe Group is a public company and employs around 2,600 people.
Launched in 1979 under the name Jersey European Airways, the airline was later renamed British European (BE), and then Flybe. It took over BA Connect in 2007 to create Flybe Group.

In the UK, Flybe's largest base is Birmingham Airport and it has other large bases at Belfast City Airport, Manchester Airport and Southampton Airport airports, with a total of 14 crew and aircraft bases across the United Kingdom, the Channel Islands and the Isle of Man.

The company holds a United Kingdom Civil Aviation Authority Type A Operating Licence permitting it to carry passengers, cargo and mail on aircraft with 20 or more seats.

History
Flybe started operations on 1 November 1979 as Jersey European Airways as a result of a merger of Jersey-based Intra Airways and Bournemouth-based Express Air Services, and was founded by John Habin, a resident of Jersey and the majority investor. After selling Aviation Beauport and other business interests, Habin established some key routes from Jersey to the UK, before selling the airline in November 1983 to Jack Walker's Walker Steel Group, which already owned Blackpool-based charter airline Spacegrand Aviation. The two airlines were then run separately, with partially shared management, until 1985 when they amalgamated under the Jersey European name, with the airline's headquarters moving to Exeter.
The airline became British European in June 2000, shortening this title to Flybe on 18 July 2002 and repositioning itself as a full-service, low-fare airline.
On 3 November 2006 it was announced that Flybe would buy BA Connect, except for that airline's services out of London City Airport. The takeover was complete in March 2007. The expanded airline's owners were Rosedale Aviation Holdings (69%), Flybe staff (16%) and – as a result of the BA Connect takeover – International Airlines Group (15%).  The acquisition increased Flybe's route network in both the UK and continental Europe, making Flybe Europe's largest regional airline.

On 14 January 2008 it was announced that Flybe had signed a franchise agreement with Scottish airline Loganair, to commence on 26 October 2008 following the termination of Loganair's franchise agreement with British Airways on 25 October 2008. The agreement would see Loganair aircraft flying in Flybe colours on 55 routes from Scotland.
In 2008, in order to avoid losing a £280,000 rebate from Norwich Airport, Flybe hired 172 actors as "fake passengers" on 11 flights to Dublin. As a result the environmental group Friends of the Earth called on the government to launch an investigation into the aviation industry.
Chief Executive Officer Jim French was recognised in the 2009 Queen's Birthday Honours List with a CBE for his services to the airline industry.

On 10 December 2010, Flybe floated an IPO on the London Stock Exchange, with trading in shares commencing on the same day. Full public release of shares followed on 15 December 2010. The share price was set at 295p, valuing the company at approximately £215 million, and raising £66 million for the company, half of which was to pay for fleet expansion.
On 23 May 2013, it was reported that Flybe had sold its slots at Gatwick airport to Easyjet for £20m, and that the slots would be handed over to Easyjet on 29 March 2014.
On 23 April 2014, Flybe announced that it will launch domestic and international flights from London City from 27 October 2014 after signing a five-year deal with the Docklands Airport. Three aircraft will be based at regional airports and two at London City, from where it is expecting to carry around 500,000 passengers a year.

Fleet
As of April 2014, the Flybe fleet includes the following aircraft: