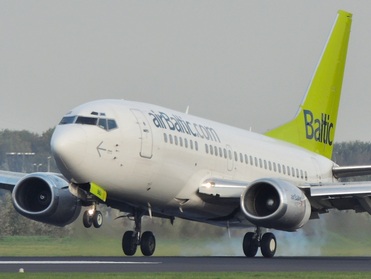 History
The airline was established on 28 August 1995 with the signing of a joint venture between Scandinavian Airlines (SAS) and the Latvian state. Operations started on 1 October 1995 with the arrival of the first Air Baltic aircraft, a Saab 340, at Riga, and that afternoon, the plane made the first passenger flight for Air Baltic.

In 1996, the airline's first Avro RJ70 was delivered; and Air Baltic joined the SAS frequent flier club as a partner. 1997 saw the opening of a cargo department and, in 1998, the airline's first Fokker 50 plane was delivered. The adopted livery was mainly white, with the name of the airline written in blue on the forward fuselage, the 'B' logo being heavily stylized in blue checks. The checker blue pattern was repeated on the aircraft tailfin.

In 1999, Air Baltic became a joint stock company; it was previously a limited liability company. All of their Saab 340s were replaced by Fokker 50s. By September, the airline had begun operating under the European Aviation Operating Standards, or JAR ops. Air Baltic welcomed the new millennium by introducing new uniforms and opening a cargo center at Riga's airport.

The first Boeing 737-500 joined the fleet in 2003, and on 1 June 2004, Air Baltic launched services from the Lithuanian capital, Vilnius, initially to five destinations. In October 2004, Air Baltic was rebranded as AirBaltic. Their present livery consists of an all-white fuselage and lime tailfin. AirBaltic.com is displayed on the forward upper fuselage, and the word "Baltic" is repeated in blue on the lower part of the tailfin. In December 2006, the first Boeing 737-300 joined the fleet and was configured with winglets. In July 2007, AirBaltic introduced an online check-in system. It was the first online check-in system in the Baltic states. In Spring 2008, two long-haul Boeing 757 joined the existing AirBaltic fleet. On 10 March 2008, it was announced that in the next three years the airline would acquire new aircraft, experiencing the largest fleet expansion in the company's history. The new additions will be next generation Q400 aircraft.

AirBaltic previously had strong links with SAS, which owned 47.2% of the airline until January 2009. It operated frequent flights to SAS hubs in Copenhagen, Oslo and Stockholm, and the airline formerly used the SAS EuroBonus frequent flyer programme, but it now has its own: BalticMiles. Some of airBaltic's products and services are still shared with SAS, including co-ordinated timetabling and shared airport lounges. AirBaltic is not a member of any airline alliance. At the moment, however, codeshare agreements are in place with several Star Alliance member airlines and others.

It previously had secondary hubs at Vilnius International Airport and Lennart Meri Tallinn Airport. The majority of the routes commenced from Tallinn were cancelled shortly after opening, leading to complaints from the Estonian Consumer Protection Department.[7] On 23 September 2010, AirBaltic made an announcement to establish a new secondary hub at Oulu Airport. In early 2012 it was confirmed that the Oulu hub plans had been cancelled due to AirBaltic's financial problems.
As of December 2010, AirBaltic employs 1443 people.

Ownership and financial problems in 2011
In January 2009, SAS sold its entire stake in the company (47.2% of the airline) to Baltijas aviācijas sistēmas Ltd (BAS) for 14 million lats. BAS was wholly owned by Bertolt Flick (President and CEO) until December 2010, when 50% of BAS shares were transferred to Taurus Asset Management Fund Limited, registered in the Bahamas.
In August 2011, airBaltic requested more than 60 million lats in capital as its losses continued to mount, and has suffered speculation about its financial position and political scandals throughout 2011. In mid-September 2011, the company announced plans to lay off around half its employees and cancel around 700 flights a month to avoid possible grounding. The company also announced that a mystery investor was willing to pay 9.6 million euros for an additional 59,110 shares. On 4 October 2011, the plans were annulled in order to make the necessary investments in the airline's capital. The government of Latvia and Baltijas aviācijas sistēmas Ltd. agreed to invest around 100 million lats in the airline's share capital in proportion to their stakes in airBaltic. In connection with the agreement, Bertolt Flick stepped down as long-term President and CEO of the airline. Martin Gauss, former CEO of Hungarian airline Malev, became the new CEO of AirBaltic.
The cost-cutting program, initiated by airBaltic which aims to return to profitability in 2014, scored better than planned results in 2012, by narrowing its losses to -€27.2 million, from -€121.5 in 2011.

Fleet
As of September 2013, the AirBaltic fleet consists of the following aircraft with an average age of 12.9 years: