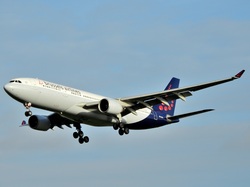 Brussels Airlines is the flag carrier airline of Belgium. It is headquartered on the grounds of Brussels Airport in Diegem, Machelen, Belgium, and is a subsidiary of SN Airholding and Lufthansa. It is the largest airline based in Belgium, operating to over 65 destinations in 20 European countries as well as long-haul flights to North America and East, Central, and West Africa. It operates charter services, maintenance and training of cockpit and cabin crew. The airline is a member of the International Air Transport Association (IATA), the Association of European Airlines (AEA), and Star Alliance. The Belgian airline is currently ranked as a 3 Star Airline by Skytrax. The Airline's IATA code is SN inherited from Sabena and SN Brussels Airlines.

On 30 January 2014, Brussels Airlines launched its most important expansion in its history, with nine confirmed seasonal destination and a return to the Polish market after some years of absence. It also confirmed the permanent exit of its Avro RJ100 fleet by 2016.

Fleet
As of February 2014, the Brussels Airlines fleet consists of the following aircraft with an average age of 13.1 years: