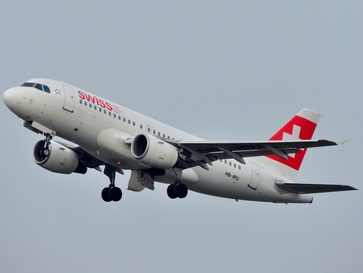 Swiss is a subsidiary of the German airline group the Lufthansa Group, with headquarters at EuroAirport Basel-Mulhouse-Freiburg near Basel, Switzerland, and an office at Zurich Airport in Kloten, Switzerland. The company's registered office is in Basel.

The airline uses the IATA Code LX that it inherited from the Swiss regional airline Crossair (Swissair's code was SR). The ICAO code is SWR, inherited from Swissair (Crossair's was CRX), in order to keep international traffic rights. 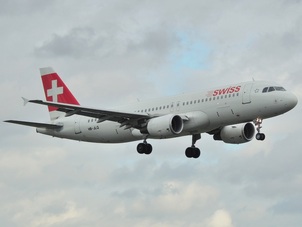 History
Beginnings
The airline was formed after the 2002 bankruptcy of Swissair, Switzerland's former flag carrier. Crossair had 40% of its income come from the defunct Swissair. The new airline's losses totaled $1.6 billion from startup until 2005. Swissair's biggest creditors, Credit Suisse and UBS, sold part of Swissair's assets to Crossair, the regional counterpart to the transatlantic Swissair. At the time, both Swissair and Crossair were under the same holding company, called SAirGroup. Crossair later changed its name to Swiss, and the new national airline started its operations officially on 31 March 2002. The airline was first owned by institutional investors (61.3%), the Swiss Confederation (20.3%), cantons and communities (12.2%) and others (6.2%). Swiss also owns subsidiary companies Swiss Sun (100%) and Crossair Europe (99.9%). It has a total of 7,383 employees.

According to Marcel Biedermann, the managing director intercontinental markets for Swiss, there were three possibilities: stay independent as a niche carrier, shrink to an unrecognisable level, or attach onto another airline group. The last choice was taken. Swiss talked to Air France-KLM, British Airways, and Lufthansa. However, Swiss was tied up with debt and an uncertain future, and seemed to be an unattractive investment. After merging with KLM, Air France said they were too busy to deal with Swiss joining them. British Airways was open, and Oneworld partners thought Zurich Airport would be a viable alternative hub for London Heathrow.

After almost a year of disputes, Swiss was finally accepted into the Oneworld airline alliance, after having been blocked by British Airways, which competes with Swiss on many long-haul routes. On 3 June 2004, Swiss announced its decision not to join Oneworld because they did not want to integrate their current frequent flyer program into British Airways' Executive Club. Furthermore, Swiss thought the relationship was one sided, where British Airways sapped out the benefits of the airline, but they would get no return.

Recovery
The airline annually halved its losses, and in 2006 recorded a net profit of $220 million. The net profit for 2007 was $570 million. Biedermann stated in the March 2008 edition of "Airways", that "this was the beginning of getting our house back in order." He said that help was needed and looked up to Lufthansa as a comparison, so their coming together was natural, even with their differences. Even with the smaller network, Swiss carries the same number of passengers as they did in 2002.

On 22 March 2005 Lufthansa Group confirmed its plan to take over Swiss, starting with a minority stake (11%) of a new company set up to hold Swiss shares called Air Trust. The Swiss operations were gradually integrated with Lufthansa's from late 2005, and the takeover was completed on 1 July 2007. Swiss joined the Star Alliance and became a member of Lufthansa's Miles and More frequent flyer program on 1 April 2006.
The airline has set up a regional airline subsidiary called Swiss European Air Lines. This carrier has its own air operator's certificate. The two independently operating divisions Swiss Aviation Training and Swiss WorldCargo (using the belly capacity of passenger planes) are also owned by Swiss.

In 2008 Swiss International Air Lines acquired Edelweiss Air and Servair - now Swiss Private Aviation. From February 2011, Swiss Private Aviation ceased to operate as a result of internal reconstruction. The company recommended Lufthansa Private Jet Service as a succedaneum.
In 2007 Swiss placed an order for 9 Airbus A330-300 to eventually replace the existing A330-200s. The A333 is more environmentally friendly and has three-class seating. As each A330-300 arrives, an A330-200 is retired from the fleet. The first A330-300 jet was put into service from Zurich to New York-JFK in April 2009. In spring 2010 Swiss operated 5 A330-300s for mid-long haul route. The remaining 4 A330-300 aircraft joined the fleet in 2011.

Lufthansa Group takeover
Following Lufthansa Group takeover, the regional fleet was changed from Crossair's Embraer ERJs and Saabs to Avro RJs, which are flown by a wholly owned subsidiary, Swiss European Air Lines. The rest of the fleet, apart from the regional jets, was also rationalised and is now all Airbus.
The airline reconstruction also caused Swiss to renegotiate their supplier contracts, which include ground handling, maintenance, food service, and labour.
The shareholders of Swiss received a performance-based option for their shares. Payment will be in 2008, and the amount will depend on how well Lufthansa's shares compare with competitors' shares. Lufthansa continues to maintain Swiss as a separate brand.

2010s
In 2010, Swiss and Lufthansa were named in a European Commission investigation into price-fixing, but was not fined due to acting as a whistleblower.
On August 18, 2011, Swiss announced a new logo for their company, resembling the logo of the defunct Swissair. The new logo lead to vivid online criticism, within days several protest groups on social media platforms appeared.