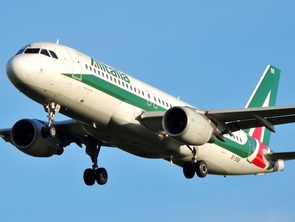 Alitalia—Compagnia Aerea Italiana S.p.A. (English: Alitalia — Italian Air Company), operating as Alitalia, is the flag carrier and national airline of Italy, which took over the name, the landing rights, many planes and some other assets from the liquidation process of the old Alitalia — Linee Aeree Italiane and all of Air One. The company has its head office in Fiumicino, Italy. Its main hub is Leonardo da Vinci-Fiumicino Airport, Rome.

Alitalia is Italy's biggest airline, and the world's 19th. The name "Alitalia" is an Italian portmanteau of the words ali (wings), and Italia (Italy). In late 2013, facing bankruptcy, the loss of a major fuel supplier, and a possible grounding by Italy's civil aviation authority, the airline announced a €500 million rescue package which includes a €75 million investment by the Italian state-owned postal operator 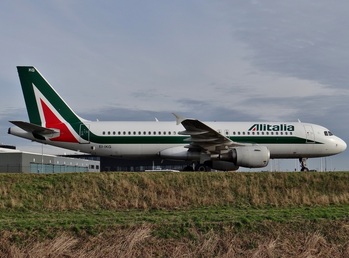 History
Creation of Alitalia-CAI
In 2008, a group of investors made the "Compagnia Aerea Italiana" (CAI) consortium aimed to buy the bankrupt Alitalia — Linee Aeree Italiane ("old" Alitalia) and to merge these with Air One, another Italian carrier.
On 30 October 2008, CAI offered €1000 million to acquire parts of the bankrupt airline, amidst pilots' and flight crew members' opposition to labour agreements.
On 19 November 2008, CAI's offer was accepted by the bankruptcy administrator of Alitalia with the permission of the Italian government, at the time major shareholder of the bankrupt airline. Alitalia's profitable assets were transferred to CAI on 12 December 2008 after CAI paid €1052 million, consisting of €427 million in cash and the assumption of responsibility for €625 million in Alitalia debt.

A USA diplomatic cable disclosed in 2011 summarised the operation as follows: "Under the guise of a rather quaint (and distinctly un-EU) desire to maintain the Italian-ness of the company, a group of wealthy Berlusconi cronies was enticed into taking over the healthy portions of Alitalia, leaving its debts to the Italian taxpayers. The rules of bankruptcy were changed in the middle of the game to meet the government's needs. Berlusconi pulled this one off, but his involvement probably cost the Italian taxpayers a lot of money."
On 13 January 2009, the "new" Alitalia launched operations. The owners of Compagnia Aerea Italiana sold 25% of the company's shares to Air France-KLM for €322 million. Air France-KLM also obtained an option, subject to certain conditions, to purchase additional shares after 2013.
The "new" Alitalia is officially a different company, which refused to honour passengers claims against the old bankrupt Alitalia on this basis.

History under new ownership
In January 2010, Alitalia celebrated its first anniversary since the relaunch. It carried 22 million passengers in its first year of operations. In 2011, 25 million passengers were carried.
On 1 February 2010, it was announced that Alitalia crew would go on a four hour strike over wages. This was the first strike action for Alitalia since the relaunch.
On 11 February 2010, Alitalia announced that, starting from March 2010, it would be using Air One as a low-fare airline ("Smart Carrier"), with operations based at Milan Malpensa Airport, focused on short-haul leisure routes. It was predicted that the subsidiary would handle 2.4 million passengers by 2012. In 2011, 1.4 million passengers were carried by the subsidiary. Although operations were initially to be concentrated at Milan Malpensa, Air One operates from four bases as of January 2013: Milan-Malpensa, Venice-Marco Polo, Pisa and Catania.
On 12 February 2011, information was released about a possible merger between Alitalia and Meridiana Fly, another Italian carrier, however, the airlines are still independent as of March 2012.

On 25 January 2012, Alitalia signed memoranda of understanding with two other Italian airlines, Blue Panorama and Wind Jet, and said to have started processes "aimed at achieving integration" with them.
By the end of July 2012, the Italian antitrust authority granted Alitalia, to acquire Wind Jet, but in return Alitalia had to give up slots on domestic key routes. Faced with this, Alitalia cancelled the plans a few days later in August 2012.
On the 3rd May 2013, in a sting codenamed "Operation Clean Holds", police made 49 arrests at Rome's Fiumicino airport, with another 37 in major Italian airports including Bari, Bologna, Milan Linate, Naples, Palermo and Verona. All were Alitalia employees caught on camera and most were charged with aggravated theft and damage. Hidden camera footage has been released showing employees rifling through, stealing from, and intentionally damaging passenger's baggage belonging to various carriers.

Fleet
As of April 2014, the Alitalia mainline fleet consists of the following aircraft: 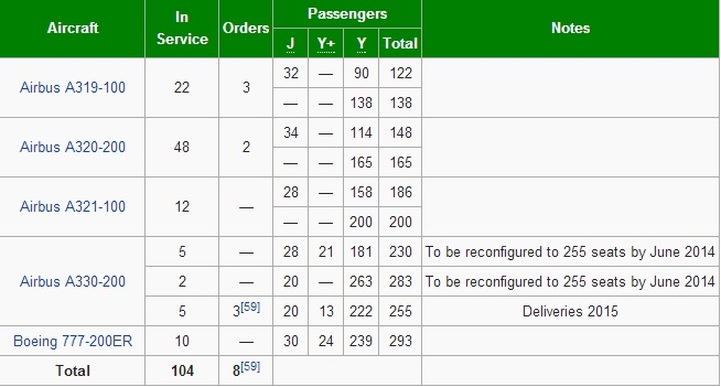