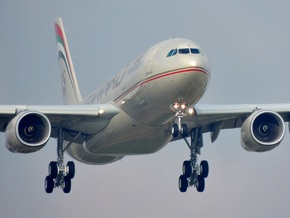 Etihad Airways is the flag carrier airline of the United Arab Emirates. Established by royal decree in July 2003 and based in Abu Dhabi, Etihad commenced operations in November 2003. The name derives from the Arabic word for "union" (الإتّحاد al-ittiḥād).

The airline operates more than 1,000 flights per week to 96 passenger and cargo destinations in the Middle East, Africa, Europe, Asia, Australia and the Americas, with a fleet of 85 Airbus and Boeing aircraft. In 2012, Etihad carried 10.3 million passengers, a 23% increase from the previous year, delivering revenues of 4.8 billion US dollar and net profits of 42 million US dollar. Etihad Airways is the fourth largest airline in the Middle East and it is the second largest airline in the United Arab Emirates, after the Dubai-based airline Emirates.

In addition to its core activity of passenger transportation, Etihad also operates Etihad Holidays and Etihad Cargo. The airline is based at Abu Dhabi International Airport and its head office is in Khalifa City A, Abu Dhabi.
Etihad reported its first full-year net profit in 2011, of US$14 million, in line with the strategic plan announced by CEO James Hogan in 2006.

In December 2011, Etihad announced it had taken a 29.21% stake in Air Berlin, Europe's sixth largest airline, and James Hogan was appointed Vice Chairman. It followed this up with minority stakes in other airlines—Air Seychelles (40%), Aer Lingus (2.987%), Virgin Australia (10%). Also, Etihad is close to acquiring 24% stake in Indian carrier Jet Airways.On August 1, 2013, the President of the company, James Hogan, signed a deal with Aleksandar Vučić, First Deputy Prime Minister of Serbia, in Belgrade, giving Etihad a 49% stake in the Serbian national carrier Jat Airways/Air Serbia. The Serbian Government retains 51% of the shares. Among numerous terms of the deal, a complete re-branding of Jat Airways is planned, including the name change. The new company is named Air Serbia. At the 2013 Dubai Airshow, Etihad announced that it is acquiring 33.3% stake in the Swiss carrier Darwin Airline. Darwin will be rebranded as Etihad Regional from March 2014. 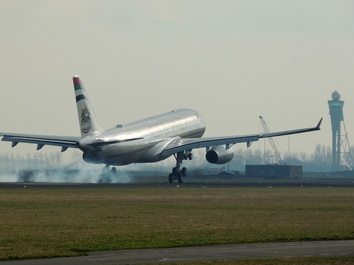 History
Etihad Airways was established as the flag carrier of the United Arab Emirates in July 2003 by Royal (Amiri) Decree issued by Sheikh Khalifa bin Zayed Al Nahyan. It started with an initial paid-up capital of AED500 million. Services were launched with a ceremonial flight to Al Ain on 5 November 2003. On 12 November 2003, Etihad commenced commercial operations with the launch of services to Beirut, and has gone on to become the fastest growing airline in the history of commercial aviation. Prior to the establishment of Etihad, Gulf Air was the airline which was based at Abu Dhabi Airport and was also co-owned by Bahrain.

In June 2004, the airline made an US$8-billion aircraft order for five Boeing 777-300ERs and 24 Airbus aircraft, including four A380-800s.
The airline announced what was the largest aircraft order in commercial aviation history at the Farnborough Airshow in 2008, for up to 205 aircraft—100 firm orders, 55 options and 50 purchase rights.
As of February 2013, the airline operates passenger and cargo services to 86 destinations around the world from its home base in Abu Dhabi.
In 2012, Etihad carried 10.3 million passengers, a 23% increase on the previous year.

Fleet
The Etihad Airways fleet consists of the following aircraft (as of February 2014): 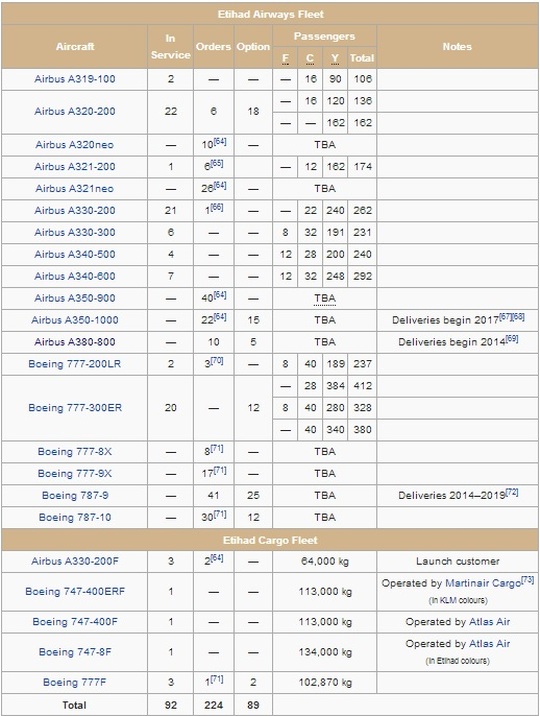