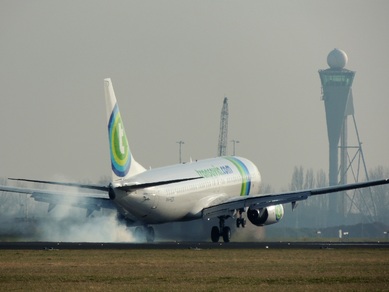 Transavia Airlines C.V., styled as transavia.com and known as Transavia, is a Dutch based low-cost airline operating as an independent part of the Air France-KLM group. Its main base is at Amsterdam Airport Schiphol; Rotterdam The Hague Airport (RTM) and Eindhoven Airport (EIN) are its secondary hubs. In France, Paris-Orly Airport is the main base of its French affiliate. Transavia.com chiefly operates scheduled and charter services to leisure destinations. It is headquartered in the TransPort Building at Schiphol Airport in Haarlemmermeer. 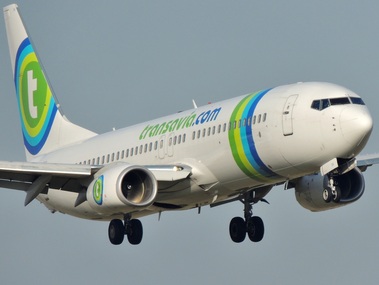 History
The first brainstorming sessions about starting a second charter company in the Netherlands, after Martinair, started in spring 1966, when the American Chalmers Goodlin met with captain Pete Holmes. "Slick" Goodlin had recently bought the dormant small company Transavia Limburg, based in Maastricht, which had 3 DC6's available. The Dutch Government needed to be approached in order to obtain an operating license for the airline, both in order to be allowed to operate out of Amsterdam Airport, and for these DC6's.

At that stage John Block, a former member of the Martinair Holland management, was willing to take that on. He succeeded, the license was issued on 14 November 1966 and 2 days later on 16.11.1966 the first (maiden) commercial flight, flown by Captain Pete Holmes – Amsterdam/Naples/Amsterdam – on board were the Dutch Ballet Orchestra and the Dutch Dance Theatre. This was the first flight with the new name of Transavia Holland.
The company found offices at the old Schiphol Airport, Hangar 7 and the fledgling's financier Slick Goodlin appointed the 3-pronged Management: Commercial Director J.N. Block, Director Operations H.G. Holmes and Technical Director Kees de Blok. Some of the first employees were: Pilots John Schurman (Canadian), Hans Steinbacher & Pim Sierks (Dutch), Chief Stewardess Willy Holmes-Spoelder and her stewardesses: Senior Stewardess Wil Dammers and 6 carefully selected & trained young women.

Building up the airline from scratch, ten years later Transavia had a marketshare of 45% of the Dutch holiday market and became the main competitor of Martinair. In 1986, the Transavia Holland brand was changed into Transavia Airlines. It was the first airline to take advantage of the first open skies agreement signed between the UK and Dutch governments. Transavia started operating its first scheduled service on the Amsterdam to London Gatwick route on 26 October 1986.
During 1991, the airline's major shareholder, Nedlloyd, sold its 80% holding to KLM. In 1998, Transavia was the first foreign airline to operate domestic services in Greece following a change in Greek aviation law. In June 2003, KLM acquired the remaining 20% of Transavia, making it 100% KLM owned. The subsequent merger of Air France and KLM made Transavia a wholly owned subsidiary of Air France-KLM.

In the early 2000s, Transavia was primarily a charter airline with a low-cost airline subsidiary called Basiq Air. To strengthen its brand image, the two were combined under the transavia.com name on 1 January 2005.
Transavia has a French unit, Transavia France, based at Paris-Orly, which operates ten 737-800s. A Danish unit, Transavia Denmark, based at Copenhagen was operated until the end of April 2011, but was shut down after failing to meet expectations.
Fleet
As of December 2013, the Transavia fleet (excluding Transavia France) consists of the following aircraft. All aircraft are fitted with performance-enhancing winglets.