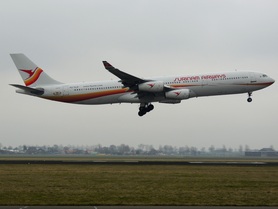 Surinam Airways, also known by its initials SLM, is the flag carrier of Suriname, based in Paramaribo. It operates regional and long-haul scheduled passenger services. Its hub is at Johan Adolf Pengel International Airport.
As of July 2012, Surinam Airways is fully owned by the Government of Suriname.

History
The airline was established in 1953, aimed at operating feeder flights from a domestic network. Scheduled operations started in 1955, initially serving the Paramaribo–Moengo route. On 30 August 1962, the company was taken over by the Surinamese government and renamed SLM – Surinaamse Luchtvaart Maatschappij.

Upon the country's independence in November 1975, the carrier was appointed as the national airline of the Republic of Suriname, and it also started services to Amsterdam using a Douglas DC-8-63 that was leased from KLM.

At March 1980, the carrier had 400 employees. At this time, the aircraft park consisted of a Douglas DC-8-63, a Douglas DC-8-50F and three Twin Otters that worked on international routes to Amsterdam, Belem, Curacao, Georgetown, Manaus, Miami and Panama City and to domestic services to Apoera, Avanavero, Bakhuys, Djoemoe, Ladouanie, Moengo and Nieuw Nickerie. On 7 June 1989, a Douglas DC-8-62 crashed on approach to Zandery Airport, killing 175 occupants on board.

In early 2009, Surinam Airways ordered two Boeing 737-300 aircraft from AWAS to replace the McDonnell Douglas MD-82. In November the same year, the carrier retired the Boeing 747-300 from service. The aircraft had been bought from KLM in 2004. It was replaced with a 317-seater Airbus A340 that previously belonged to Air France.

Fleet
As of April 2014, the Surinam Airways fleet comprises the following aircraft: