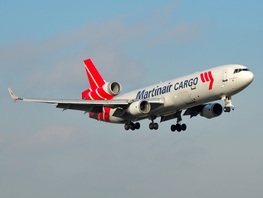 Martinair Holland N.V., operating as Martinair, is a Dutch airline based in Amsterdam, The Netherlands. The airline was founded in 1958 by Martin Schröder. As of 2014, Martinair operates primarily as a cargo airline with services to over 50 destinations worldwide. Flights are on a scheduled basis, but charter services are also operated. The Martinair headquarters are in the TransPort Building on the grounds of Amsterdam Airport Schiphol.

Additionally, Martinair operates the Regional Jet Center, a technical service center; and the Martinair Flight Academy, the oldest flight school in the Netherlands. In October 2011, Martinair ceased passenger service, which it had operated since its founding in 1958. Martinair had passenger service throughout Europe, the Americas, Asia, and Africa from Amsterdam. 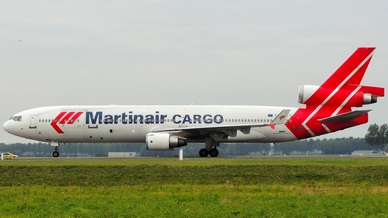 The airline was founded on 24 May 1958 as Martin's Air Charter (MAC), by Martin Schröder and John Block, with one aircraft, a de Havilland Dove and five employees. In 1963 Mr. Schröder sold 49% of the company to four equal shipping company shareholders (12.25% each, these eventually combining as Nedlloyd). KLM would later purchase the 50+% that Mr. Schröder owned, buying him out. The name was changed to Martinair Holland in 1966. A healthy boost came in 1967 with the opening of business to the United States. Martinair became all jet-powered in 1971.

In 1991, the first aircraft with the "Martinair Cargo" name was introduced, and "Holland" was dropped from all aircraft. In 1996, Martinair bought a 40% stake in Colombian cargo carrier TAMPA Cargo, based in Medellín, which it increased to 58% in 2003. The share in TAMPA was sold in February 2008 to Avianca, a Colombian company.

Martinair President and CEO Martin Schröder, who received the Tony Jannus Award in 1995 for his contributions to commercial aviation, retired in 1998 from day-to-day activities. Also that year, the European Commission in Brussels refused KLM's offer to purchase Nedlloyd's shares, which would have made KLM the sole owner. In June 2007, Martinair announced that it wanted one shareholder, preferably KLM, and in 2008 permission was obtained from the European commission. The transfer of remaining shares took place on 31 December 2008.
In November 2007, Martinair ceased its short haul operations to concentrate on its cargo activities and intercontinental flights. In September 2010, a restructuring was announced: this will involve dropping all passenger services from November 2011, which will be operated by KLM, and leaving only cargo services. In November 2010, the European Commission fined Martinair €29.5 million, following an investigation into price-fixing.

On 31 October 2011, Martinair flew its last passenger flight, leaving it as a freight carrier only.

Fleet
The Martinair fleet consists of the following aircraft (as of December 2013):


All information on this page was taken from Wikipedia. All copyright belongs to them.
Powered by