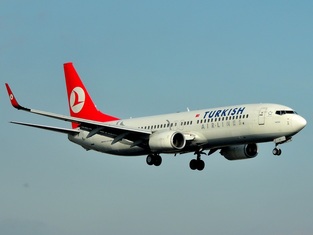 Turkish Airlines is the national flag carrier airline of Turkey, headquartered at the Turkish Airlines General Management Building on the grounds of Atatürk Airport in Yeşilköy, Bakırköy, Istanbul. It operates scheduled services to 41 domestic and 203 international airports in Europe, Asia, Africa, and the Americas. With 245 destinations, the airline is the fourth-largest carrier in the world by number of destinations. With Istanbul Atatürk Airport being the main base, the Turkish carrier has secondary hubs at Esenboğa International Airport, Sabiha Gökçen International Airport, and Adnan Menderes Airport. THY has been a member of the Star Alliance network since 1 April 2008. In April 2010, "TURKISH" replaced "TURKAIR" as the new call sign for Turkish Airlines. With an operational fleet of nine cargo aircraft, the airline's cargo division serves 47 destinations. 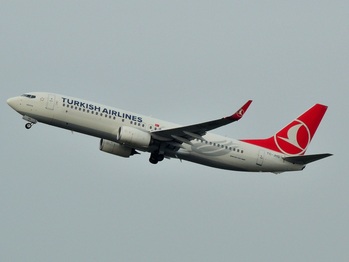 History
Early years
Turkish Airlines was established on 20 May 1933 as State Airlines Administration (Turkish: Devlet Hava Yolları) as a department of the Ministry of National Defence. The initial fleet consisted of two five-seat Curtiss Kingbirds, two four-seat Junkers F.13s and one ten-seat Tupolev ANT-9. In 1935, the airline was turned over to the Ministry of Public Works and was subsequently renamed General Directorate of State Airlines. Three years later, in 1938, it became part of the Ministry of Transportation.

Postwar period
Being initially set up as a domestic carrier, the airline commenced international services with the inauguration of Ankara – Istanbul – Athens flights in 1947, two years after a fair amount of Douglas DC-3s and Douglas C-47s joined the fleet, which enabled the carrier to expand its network.
Nicosia, Beirut and Cairo were soon added to the airline's international flight destinations. However, domestic services remained the Turkish carrier's main focus until the early 1960s.
In 1956, the Turkish government reorganized the airline under the name Türk Hava Yollari A.O. (often abbreviated as THY). It was capitalized at TRL 60 million. The airline joined the International Air Transport Association (IATA) shortly thereafter. In 1957, British Overseas Airways Corporation (BOAC) began supplying technical support after acquiring a 6.5 percent shareholding, which it held for about 20 years.
New aircraft including Vickers Viscounts, Fokker F27s and Douglas DC-3s were added to the fleet in the late 1950s and early 1960s. Turkish Airlines began operating their first jet, a McDonnell Douglas DC-9, in 1967. This was followed by the addition of three Boeing 707 jets in 1971. Other aircraft operated in the early 1970s included the McDonnell Douglas DC-10 and the Fokker F28 which were put into service in 1972 and 1973 respectively.


1980s and 1990s
The airline was plagued by several difficult issues. It developed a reputation for poor customer service and delays. It also endured hijackings and suffered seven accidents between 1974 and 1983. The most notorious came in 1974, when a DC-10 crashed shortly after take-off near Ermenonville, France, resulting in the deaths of 346 people.
A new government came to power in 1983 which recognized THY's importance as Turkey's ambassador to the world, beginning the airline's makeover into a modern operation. It would maintain one of the youngest fleets in the world. Security was intensified, causing one shipper to compare it to Israel's El Al, at least in terms of delays.
THY built a new, state-of-the-art technical center at Yeşilköy Airport in 1984. The airline was capable of both light and heavy maintenance on a number of different aircraft types. Technical staff then made up one-quarter of the airline's 6,000 employees, according to Air Transport World. In 1984, the company's capital was raised to TRL 60 billion as it was classified as a state economic enterprise. Three years later, the capital was raised again, to TL150 billion.

By the mid-1980s, THY had a fleet of 30 aircraft. It was flying about three million passengers a year to 16 domestic destinations and three dozen international ones. The airline was Turkey's largest source of foreign currency. Turkish Airlines began operating Airbus A310s in 1985, allowing the addition of flights to Singapore in 1986. A route to New York via Brussels was added in 1988.
The company posted losses in 1987 and 1988, largely due to high payments on its dozen new Airbus A310s, according to Air Transport World. The fleet also included 11 Boeing 727s and nine Douglas DC-9s. THY ended the decade with 8,500 employees.
The company suffered in the global aviation crisis following the Persian Gulf War and would not break even again until 1994. However, business was again booming in the mid-1990s, with the greatest growth coming from North American destinations. THY launched a nonstop flight to New York in July 1994.

The company's capital continued to be raised, reaching TRL 10 trillion in 1995. During that year, the airline also converted three of their Boeing 727s to dedicated freighters. The DC-9s had been sold off. The company posted a $6 million profit on revenues of $1 billion for the year. While profitable, THY had to contend with Turkey's exorbitant inflation, making capital improvements difficult.
The domestic market was deregulated in 1996, allowing new scheduled competition from charter airlines. At the same time, larger international carriers were providing stiff competition on routes to Western Europe. THY entered into marketing agreements with other international airlines to enhance their competitiveness. The company teamed with Japan Airlines to offer service to Osaka and Tokyo in 1997 and 1998. Other jointly operated flights soon followed with Austrian Airlines, Swissair, and Croatia Airlines. 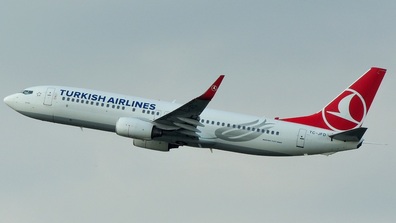 2000s
A new terminal opened for the airline in January 2000 at Istanbul's Istanbul Atatürk Airport. Turkish Airlines continued to extend their international reach, forging marketing agreements with Asiana Airlines, American Airlines, Malaysian Airlines, LOT Polish Airlines, Czech Airlines and Cathay Pacific in 2000. An Antalya-Frankfurt route was added in 2001 through a code-sharing agreement with Sun Express. However, THY withdrew from the Swissair-led Qualiflyer alliance in order to help attract a strategic investor for their privatization.

Turkey underwent an economic crisis throughout most of 2001, cutting traffic on domestic routes in particular. THY managed to survive after the September 11 attacks on the United States without a government bailout or mass layoffs, although 300 middle management positions were eliminated, 400 part-timers were laid off and wages were cut 10 percent. Turkish Daily News credited the airline's survival to entrepreneurial management, which was quick to get rid of loss-making routes at home and abroad.
In 2003, the war in Iraq prompted Turkish Airlines to close some routes in the Persian Gulf, while flights to Asia were suspended during the SARS epidemic. However, the airline soon recovered, increasing traffic on existing routes and adding service to Delhi after an 11-year lapse.
Another fleet expansion program kicked off in 2004, helping THY maintain one of the youngest fleets in Europe. In July, the airline announced a massive $2.8 billion order of 36 jets from Airbus, plus an order for 15 Boeing 737s.

THY was not just ordering new planes. It was planning to spend $350 million on a new technical and training facility at Istanbul's underutilized Sabiha Gökçen International Airport. The airline had built up a significant technical services operation, maintaining not just their own aircraft but those of third parties. Turkish Technic employed 2,700 and was planning to hire another 2,000 by 2010. THY also had three flight simulators and offered flight training services.
THY faced the entry of new competitors into the liberalizing Turkish aviation market. However, tourism was booming, with 20 million people expected to visit the country in 2005 versus 12 million in 2003. THY divested its 50% holding in Cyprus Turkish Airlines (Kibris Turk Hava Yollari) in 2005.
Although the company was publicly traded at this time, the government owned 98% of its shares. The privatization program was revived in 2004 with a public offering of 20% of shares on the Istanbul Stock Exchange. The Turkish government owned 75% of shares after the offering, which raised $170 million. Currently, the Republic of Turkey's Prime Ministry Privatization Administration owns a 49.12% interest in THY, while 50.88% of shares are publicly traded.

On 1 April 2008, Turkish Airlines joined the Star Alliance after an 18-month integration process beginning in December 2006, becoming the seventh European airline in the 20-member alliance.
In December 2011, the Turkish government unveiled plans to modernize the Aden Adde International Airport in Mogadishu, Somalia, which became one of the newest flight destinations of the carrier in 2012. The rehabilitation project is part of Turkey's broader engagement in the local post-conflict reconstruction process. Among the scheduled renovations are new airport systems and infrastructure, including a modern control tower to monitor the airspace. In March 2012, Turkish Airlines became the first international carrier to resume flights to Somalia since the start of that country's civil war in the early 1990s.
By the end of 2013, Turkish Airlines increased their number of flight points to 241 destinations worldwide (199 international and 42 domestic).

Fleet
As of April 2014, the Turkish Airlines fleet consists of 242 passenger and 9 cargo aircraft with an average age of 6.8 years. 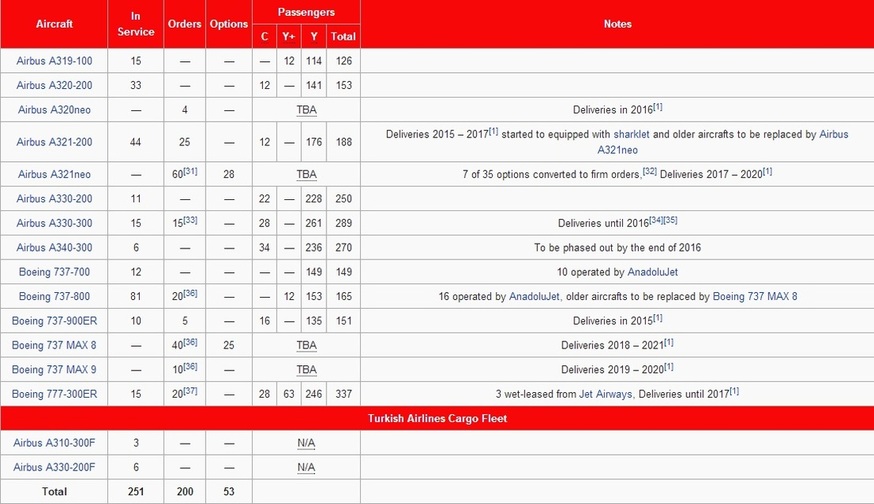