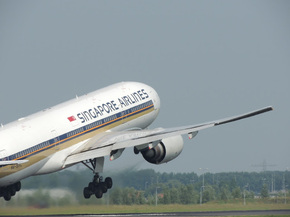 Singapore Airlines was the launch customer of Airbus A380, currently the world's largest passenger aircraft. SIA has diversified airline-related businesses, such as aircraft handling and engineering. Its wholly owned subsidiary, SilkAir, manages regional flights to secondary cities with smaller capacity requirements. Subsidiary Singapore Airlines Cargo operates SIA's dedicated freighter fleet, and manages the cargo-hold capacity in SIA's passenger aircraft. SIA once had a 49% shareholding in Virgin Atlantic before selling it to Delta Airlines for a mere €277 million in December 2012.

It also engages the low-cost carrier sector through its stake in Tiger Airways and wholly owned subsidiary, Scoot. It ranks amongst the top 15 carriers worldwide in terms of revenue passenger kilometres, and 10th in the world for international passengers carried. On 15 December 2010, Singapore Airlines was announced by the International Air Transport Association as the second largest airline in the world by market capitalisation with a worth of 14 billion US dollars. Singapore Airlines utilises the Singapore Girl as its central figure in its corporate branding. 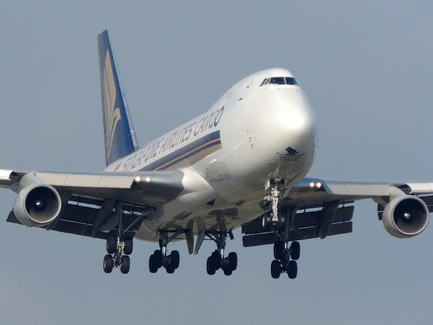 History
Origin
Singapore Airlines began with the incorporation of Malayan Airways Limited (MAL) on 1 May 1947, by the Ocean Steamship Company of Liverpool, the Straits Steamship Company of Singapore and Imperial Airways. The airline's first flight was a chartered flight from the British Straits Settlement of Singapore to Kuala Lumpur on 2 April 1947 using an Airspeed Consul twin-engined aircraft. Regular weekly scheduled flights quickly followed from Singapore to Kuala Lumpur, Ipoh and Penang from 1 May 1947 with the same aircraft type. The airline continued to expand during the rest of the 1940s and 1950s, as other British Commonwealth airlines (such as BOAC and Qantas Empire Airways) provided technical assistance, as well as assistance in joining IATA. By 1955, Malayan Airways' fleet had grown to include a large number of Douglas DC-3s, and went public in 1957. Other aircraft operated in the first two decades included the Douglas DC-4 Skymaster, the Vickers Viscount, the Lockheed 1049 Super Constellation, the Bristol Britannia, the de Havilland Comet 4 and the Fokker F27.

When Malaya, Singapore, Sabah and Sarawak formed the Federation of Malaysia in 1963, the airline's name was changed, from "Malayan Airways" to "Malaysian Airways". MAL also took over Borneo Airways. In 1966, following Singapore's separation from the federation, the airline's name was changed again, to Malaysia-Singapore Airlines (MSA). The next year saw a rapid expansion in the airline's fleet and route, including the purchase of MSA's first Boeing aircraft, the Boeing 707s, as well the completion of a new high-rise headquarters in Singapore. Boeing 737s were added to the fleet soon after.

Incorporation and growth
MSA ceased operations in 1972, when Singapore wanted to develop its international routes but Malaysia wanted to develop its domestic routes before moving on to international routes, resulting in the formation of Singapore Airlines and Malaysian Airlines System. Hence, Singapore Airlines kept all of MSA's Boeing 707s and 737s, retained the international routes out of Singapore as well as the existing corporate headquarters in the city, with J.Y. Pillay, former joint chief of MSA as its first chairperson. Female flight attendants continued to wear the sarong kebaya uniform, which had been first introduced in 1968. A local start-up advertising company, Batey Ads was given the right to market the airline, eventually selecting the sarong and kebaya-clad air stewardesses as an icon for the airline and calling them Singapore Girls.

SIA expanded almost overnight after the split from MSA in 1972, adding cities in the Indian subcontinent and Asia, and adding Boeing 727s, Boeing 747s and Douglas DC-10s to its fleet. The 1st two 747s arrived in the summer of 1973 and were deployed on the lucrative Singapore-Hong Kong-Taipei-Tokyo (Haneda Airport) run. As additional 747-200s arrived they were placed on routes to London, Paris and Rome, Australia and the long cherished USA with service to Los Angeles, California. The DC-10s lasted only a couple of years in the SIA fleet. In 1977, Singapore Airlines took delivery of its first Boeing 727-200 Advanced, flying it on its inaugural service from Singapore to Manila. The B727 was Singapore Airlines' successor to the B737-100s that it had inherited from MSA.

In 1977 British Airways and Singapore Airlines shared a Concorde for flights between London and Singapore International Airport at Paya Lebar via Bahrain. The aircraft, BA's Concorde G-BOAD, was painted in Singapore Airlines livery on the port side and British Airways livery on the starboard side. The service was discontinued after three return flights because of noise complaints from the Malaysian government; it could only be reinstated on a new route bypassing Malaysian airspace in 1979. A dispute with India prevented Concorde from reaching supersonic speeds in Indian airspace so the route was discontinued in 1980.

The 1980s saw expanded services to United States, Canada, and additional European cities with Madrid becoming the first Hispanic city to be served by SIA. Boeing 747-300s were leased and introduced into the SIA fleet in the early 1980s and named 'Big Tops'. The 747-300s replaced the 747-200s on all trans-pacific routes as well as the prime European destinations. Again a short term affair was begun with a few Boeing 757s later followed by the addition of Airbus A310s and Airbus A300s The A310s became the Asian regional workhorse of the fleet, with the small A310-200 fleet serving until the late 1990s, and the much larger A310-300 fleet serving into the 2000s. In 1989, the first of 50 B747-400s was added to the fleet. The Airbus A340-300s augmented the 747-400s on long-range routes to Spain, Zurich, Copenhagen, San Francisco and cities not suitable for 747 service. Services extended to southern Africa in the 1990s when the airline began flights to Johannesburg in South Africa; Cape Town and Durban were later added. The 1990s also saw the opening of Terminal 2 in Changi Airport in 1991; all flight operations later moved to the new terminal.

In 2003 SIA obtained 5 long range Airbus A340-500 aircraft and started the two longest nonstop flights in aviation history, Singapore – Newark and Singapore – Los Angeles. In winter 2007 SIA saw its first double decker Airbus A380-800 join the fleet. Today Singapore Airlines is the world's 2nd largest operator of the type after Emirates of the UAE. SIA employs the A380 on routes to London, Zurich, Frankfurt, Paris, Sydney, Melbourne, Los Angeles and New York. SIA is also currently a far reaching global carrier and is a cornerstone member of Star Alliance. 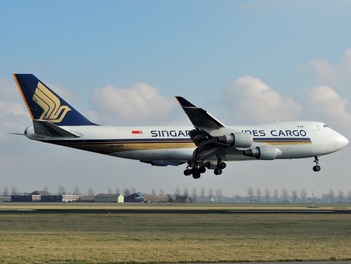 Modern history
In 2004, SIA began non-stop trans-Pacific flights from Singapore to Los Angeles and Newark, utilising the Airbus A340-500. These flights marked the first non-stop air services between Singapore and the USA. The Singapore to Newark flight held the record for the longest scheduled commercial flight, with a flying time of about 18 hours each way. Singapore Airlines has converted its five Airbus A340-500 aircraft from a 64 Business Class/117 Premium Economy Class configuration to a 100-seat all- Business Class configuration for its routes to Newark and Los Angeles. At a Cabinet meeting on 22 February 2006, the Government of Australia decided not to grant fifth freedom rights to Singapore Airlines on flights from Australia to the United States. Singapore Airlines had argued that transpacific flights from Australia suffered from under-capacity, leading to limited competition and relatively high air fares.


The move was seen as a measure taken to protect Qantas from increased competition. SIA had encountered such protectionist measures in the past when SIA was shut out from the Toronto market after complaints from Air Canada, and was forced to stop flying Boeing 747-400s into Jakarta in the wake of protests from Garuda Indonesia when it could not use similar equipment to compete.
Singapore Airlines, along with Star Alliance partner South African Airways, was fined 25 million South African Rand (S$4.1 million) as an administrative penalty to partially settle a price-fixing investigation against the airline by the South African Competition Commission from 2008 to 2012.
On 6 April 2012, Singapore Airlines phased out the last 747 in its fleet after 40 years of service. A final round-trip commemorative flight was operated from Singapore to Hong Kong with flight numbers SQ747 and SQ748 respectively. As well as an extended flying time, special meals, performances and inflight celebrations, passengers were given well stocked 747 goody bags.
The airline announced that it will end the world's longest nonstop flights from Singapore to both Newark and Los Angeles from 23 November 2013 and 20 October 2013, respectively. However, Los Angeles will continue to be served from Singapore via Tokyo-Narita.

Airbus A380
On 29 September 2000, SIA announced an order for up to 25 Airbus A3XX (as the A380 was known at the time). The US$8.6 billion order comprised a firm order of 10 aircraft, with options on another 15 airframes. The order was confirmed by Singapore Airlines on 12 July 2001. In January 2005, the airline unveiled the slogan "First to Fly the A380 – Experience the Difference in 2006", to promote itself as the first airline to take delivery of the A380-800, which was expected to take place in the second quarter of 2006. In June 2005, Airbus confirmed that due to unforeseen technical problems, initial deliveries of the Airbus A380 would be delayed by up to six months, with the first delivery now slated for November 2006. The announcement was met with fury by SIA's Chief Executive Officer, Chew Choon Seng, who threatened to sue Airbus, saying: "Airbus took some time to acknowledge the delay in the timetable for the A380's entry into service...I would have expected more sincerity."

He further stated that SIA will be turning its attention to Boeing instead, since it would be receiving the Boeing 777-300ER before the A380. Nevertheless, SIA has indicated that this would not affect its promotional campaign. In February 2006, the first A380 in full Singapore Airlines livery was flown to Singapore, where it was displayed at Asian Aerospace 2006. On 14 June 2006, Singapore Airlines placed an initial order for the Boeing 787 Dreamliner as part of its future aircraft expansion. The order consisted of 20 787-9s and rights for 20 more. This order came one day after Airbus announced that the A380 Superjumbo would be delayed by another 6 months. A third delay was announced on 3 October 2006, pushing the initial delivery of the first A380 to October 2007.

On 25 October 2007, the first commercial A380 service, SQ 380, carried 455 passengers from Singapore to Sydney, touching down in Sydney Airport at 3:24 pm local time, where it received significant attention from the media. The airline donated all revenue generated from the flight to three charities in a ceremony the next day in Sydney. SIA began regular services with the A380 on 28 October 2007.

Fleet reductions
On 16 February 2009 the airline announced that it would remove 17 aircraft from its operating fleet between April 2009 and March 2010, as part of a cost-saving initiative to help counter falling passenger and cargo demand, having originally planned to phase out only four aircraft. The airline stated that it could not rule out delaying deliveries on aircraft already ordered.

Scoot
In May 2011, Singapore Airlines revealed plans to launch a low-fare airline subsidiary within a year. The wholly owned subsidiary, New Aviation, was incorporated on 17 June 2011 with an issued and paid up capital of S$1.
On 1 November 2011, it was announced that the low-cost airline would be named Scoot and would begin flights from mid-2012 with a fleet of four Boeing 777-200 wide-body aircraft. focused on medium- and long-haul routes. The airline will be wholly owned but operated independently and managed separately from Singapore Airlines.

TATA SIA airlines
In 2013, Singapore airlines announced a formation of a joint venture TATA SIA airlines along with Tata Sons. The airline will be based out of New Delhi, India and has hoped to start operations in the second half of 2014. The airline has ordered up to 20 Airbus A320s and will compete with full service carriers Air India and Jet Airways.

Fleet
The Singapore Airlines fleet consists of the following aircraft (as of 31 March 2014): 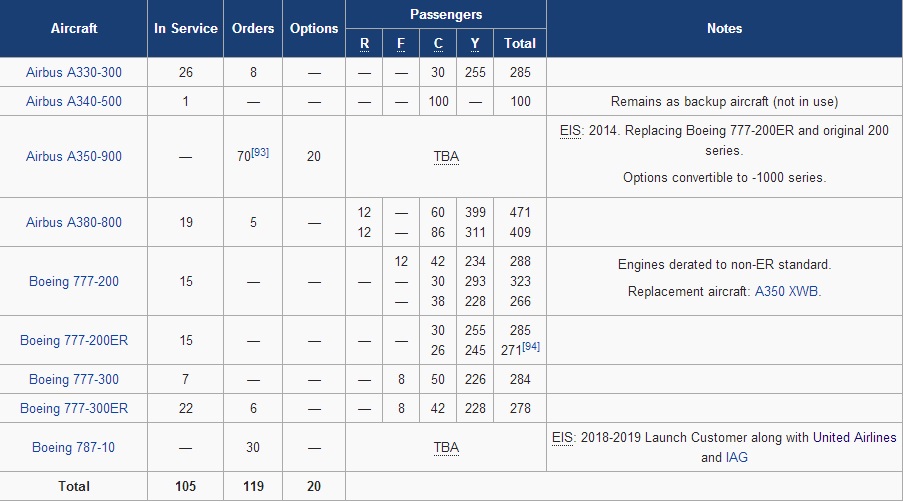